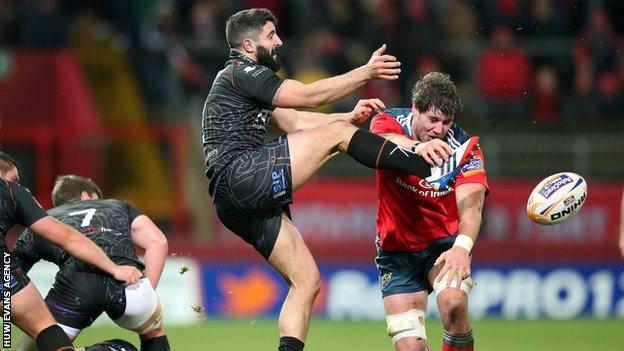 Munster returned to the top of the Pro12 table with a stodgy win against Ospreys at Thomond Park.

With a raft of players on international duty, both sides struggled for fluency and the game became a kicking battle.

JJ Hanrahan replaced Keatley at 10 and added to Munster's lead, but in injury time Morgan rescued a losing bonus point with his second penalty.

With Ireland and Wales preparing for their autumn Tests, the Celtic rivals were without a huge number of their internationals and the quality was lacking for much of the try-less encounter.

Munster had the better of the opening 40 minutes but only led 6-3 at the breaks as Morgan replied to two early kicks from Keatley.

Neither try-line was tested until late on when Ivan Dineen stepped inside Andrew Bishop's tackle to seemingly score to the left of the posts.

However, Dineen's effort was ruled out as television match official Jude Quinn ruled that the preceding Ospreys scrum, which saw the ball squirt out and into Duncan Williams' grasp, had not been completed.

Ospreys also went close to a try after the break but a double movement denied scrum-half Tito Tebaldi.

A late challenge by Ospreys replacement Hanno Dirksen on Johne Murphy drew a penalty which Hanrahan, who had earlier replaced Keatley at fly-half, converted from the 22, widening Munster's lead to nine points.

Morgan miscued a penalty from a tough position on the left and also sent a drop-goal wide.

However, a Ronan O'Mahony error gave the Ospreys a late five-metre scrum and they earned a penalty which Morgan slotted for the bonus point.

It was Munster's first win in six meetings with the Ospreys, emerging victorious for the first time since the 2011 league semi-final in Limerick.