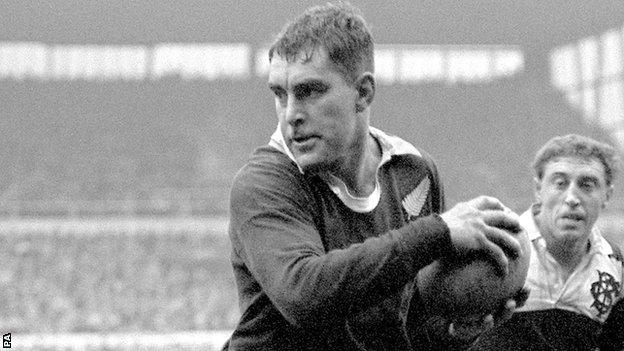 Fifty years ago New Zealand embarked upon a four-month tour of the British Isles, France and Canada.

A hugely powerful and skilled side containing the likes of All Black greats Colin Meads and Don Clarke were to play 36 games and lose just one, with Newport RFC the team to claim the most famous win in their history.

Wilson Whinneray's 1963 All Blacks arrived in the northern hemisphere towards the end of October and warmed-up with a 19-3 win over Oxford University, before thrashing Southern Counties 32-3 in Hove.

On 30 October the Kiwis arrived at a wet and blustery Rodney Parade to face a Black and Ambers side whose early-season form gave little indication that their Welsh opponents would provide much of a contest for one of the finest touring sides in New Zealand rugby history.

Newport had managed just six wins and two draws from their opening 12 matches, but the Welsh side's 13th fixture was to prove unlucky for New Zealand.

But the Black and Ambers had leadership in abundance, with captain Brian Price and vice-captain David Watkins fulfilling that role for both their club and for Wales that season.

"We weren't very worried about it before the game and I suppose we took them too lightly," admitted Meads. "We found out you don't take any Welsh clubs lightly when they're playing the All Blacks.

"I thought Brian Price had a great game, he got a lot of ball at five in the line-out in those days, and of course we always remember little Dai Watkins darting around here and there, and we couldn't catch the little bugger!"

Newport ripped into their guests from the first whistle, giving half-backs Bob Prosser and Watkins sufficient ball to work their schemes.

Part of coach Bryn Meredith's game plan was not to give opposing full-back Clarke a sniff of an opportunity either with ball in hand on the counter or with his prolific place-kicking.

Watkins, in particular, gave Clarke a torrid time and the All Blacks 15 spent much of his afternoon chasing deep balls into the corners on the slippy surface.

But to give Watkins - who would go on to play for both the British and Irish Lions in union and Great Britain in rugby league - enough possession to work his magic required the Newport pack to front up, which they did with gusto.

Price and lock partner Ian Ford matched 'Pinetree' Meads and Ron Horsley at the line-out, Nev Johnson, Graham Bevan and David Jones scrummaged their hearts out - with hooker Bevan also taking three put-ins against the head - while Newport's back-row did not give an inch.

Open-side Glyn Davidge was magnificent, putting his body on the line time and again to secure possession and suffering some brutal rucking as a result.

He was ably supported by Alan Thomas and Keith Poole, at the time a 20-year-old who had played only one first-team game but had been drafted in at late notice in place of the injured Brian Cresswell.

Poole holds a place in Newport history by never finishing on the losing side in his three appearances against major touring teams, beating New Zealand, South Africa in 1969 and drawing with Australia in 1966.

"I realised from the start that as a pack of forwards we had the upper hand," said Price.

"We had a couple of balls against the head, we were doing quite well in the line-out and we had Glyn Davidge, who was absolutely outstanding and killed every New Zealand ruck.

"He laid his body on the line and he paid for it; he didn't play for another fortnight afterwards and his back was black and blue - but he wore those bruises like medals, and he deserved a medal."

The game was so fiercely contested, and the weather so detrimental to a free-flowing game, that scoring chances were limited.

As it happened just one score was enough to win the contest 3-0 and it came 17 minutes into the game.

Stuart Watkins's cross-kick earned good field position for Newport and from the resulting maul Prosser fed John 'Dick' Uzzell, who had been a doubt for the game because of a hamstring injury.

The centre's first instinct seemed to be to race for the corner but with the defensive cover making a try uncertain, Uzzell checked back and instead dropped a goal over the New Zealand posts.

With the slimmest of leads to defend, Newport held firm under increasing pressure and could even have doubled the lead when Ray Cheney's late penalty hit the crossbar.

Uzzell's scruffy kick remained the difference between the two sides and earned Newport's place in Welsh rugby history as just the third club side to beat the mighty All Blacks, joining the 1935 Swansea side and Cardiff in 1953, while Llanelli would join this select group in 1972.

New Zealand would not lose another game on the '63 tour - although Scotland would hold them 0-0 at Murrayfield - underlining Newport's achievement and creating that golden moment when the Black and Ambers humbled the All Blacks.