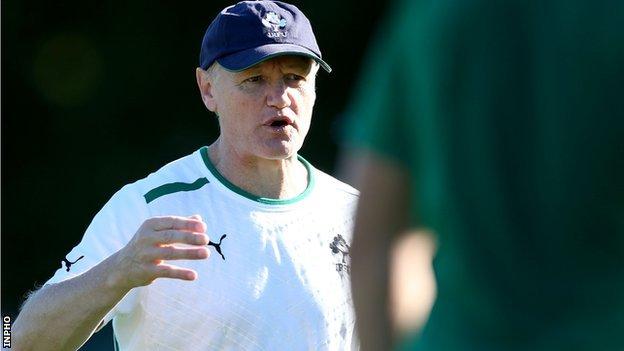 Joe Schmidt could have asked for an easier start as he attempts to resurrect the fortunes of an often under-performing Ireland rugby team.

The new coach faces a tough autumn opener against a Samoa team ranked one place above the Irish in the current IRB world standings, followed by meetings with southern hemisphere giants Australia and New Zealand.

New Zealander Schmidt, named as the successor to Declan Kidney after a largely disastrous Six Nations campaign, takes up the reins at a time when most observers believe things can only get better for the national team.

The fact that he comes into the job with a formidable pedigree only adds to the growing mood of expectation.

The Kiwi worked his magic by transforming French side Clermont Auvergne into a considerable force through his role as backs coach and then enjoyed a hugely successful spell at Leinster, who won two Heineken Cups during his tenure.

Like his predecessor, Schmidt faces the challenge of transferring the impressive record of Ireland's provinces at Pro12 and European club level into consistent displays on the international stage, with the 2015 Rugby World Cup the ultimate goal.

First up at the Aviva Stadium on 9 November are the Samoans, who have claimed the notable scalps of Wales, Scotland and Italy over the past 12 months, the latter two countries having beaten Ireland in the Six Nations earlier this year.

Australia, the visitors to Dublin on 16 November, lie fourth in the world rankings but struggled in the recent Rugby Championship, in which they came a distant third behind New Zealand and South Africa.

Ireland's record against the Wallabies, especially at home, is reasonable, in contrast to the All Blacks, whom the Irish have never beaten.

The reigning world champions deservedly remain the undisputed number one team in the world and the fact that the 'sold out' signs have long since been put out for the 24 November clash is testimony to their continued pulling power across the globe.

The Schmidt regime received an early boost in the spring with the news that Brian O'Driscoll had committed to the cause for one more season and the initial reaction to training camps has been decidedly positive.

Injuries to wingers Simon Zebo and Craig Gilroy and forwards Richardt Strauss, Iain Henderson, Donnacha Ryan and Tommy O'Donnell have slightly hampered preparations for the November series however, while Sean O'Brien, Declan Fitzpatrick, Rory Best, Paul O'Connell and Keith Earls have been added to the list of injury concerns in recent weeks.

Allied to that is the fact that O'Driscoll has had very little game time under his belt for Leinster this term.

The ever-growing injury list has delayed the selection of the new Irish captain, for which there are a number of leading contenders.

Hugely experienced Munster second row Paul O'Connell is the favourite for the role, although O'Driscoll, Jamie Heaslip, Best, Rob Kearney, Jonathan Sexton and Peter O'Mahony all have credible claims on the skipper's armband.

Much attention will focus on the performances of fly-half Sexton, who has been a clear first-choice for the number 10 shirt of late, but has featured in 13 straight matches since joining French outfit Racing Metro.

Since leaving the strict confines of the Irish Player Management Programme, the ex-Leinster player has started every match bar two for his new club, and is also reported to have lost weight.

It is news that may sound alarm bells at IRFU headquarters as a number of other Irish players, including Heaslip, O'Brien, O'Connell, Donnacha Ryan and Conor Murray, are understood to be the subject of lucrative offers from well-off French Top 14 clubs.

Regardless of any fears over potential burn-out, a fit Sexton is certain to start against the Aussies and the Kiwis, but may be held back for the game with Samoa.

This could open the door for Ulster's in-form Paddy Jackson, Kidney's preferred replacement for the injured Sexton during the Six Nations, or Ian Madigan, who was handed the jersey during Ireland's summer tour to the United States and Canada.

The fact that Madigan has played second fiddle to Jimmy Gopperth at Leinster so far this season may be of some concern, leaving Jackson as favourite to get the nod thanks to the extra game-time he has enjoyed.