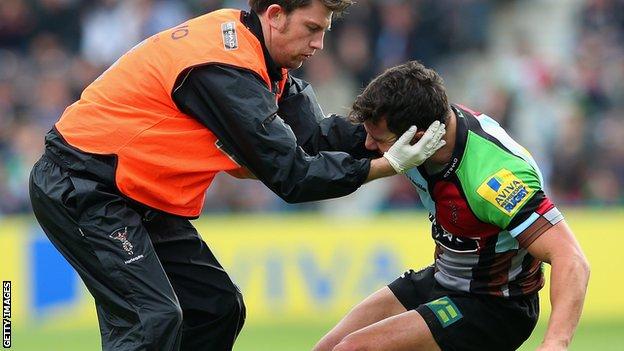 Harlequins centre George Lowe will be out for the rest of the season with a neck injury.

The 24-year-old, who signed a new three-year deal at the Stoop this summer, suffered the injury in the 22-12 defeat by Saracens last month.

Lowe will now undergo a treatment programme in the hope of being fit for the start of the 2014-15 campaign.

Currently in the treatment room are:

The academy graduate made his first-team debut for Quins in 2009 and has scored 24 tries in 107 appearances.

Former Epsom College pupil Lowe played for the England Under-20s in the Junior World Championships in 2009 and was called into the England squad that toured South Africa in 2012.

He is uncapped at senior international level but has featured for the England Saxons side.

Harlequins have a number of first-team players sidelined by injury and brought in centre Tim Molenaar on Monday until the end of the season to help ease their problems.

The 2012 Premiership champions are sixth in the table, having lost three of their six league games this season.

Their resources will be tested further over the coming month, with Chris Robshaw, Mike Brown and Joe Marler set to be involved in England's autumn international Tests.

"There is a huge challenge for us in terms of players away and injured," Quins director of rugby Conor O'Shea told BBC London 94.9.

"We're dealing with it by having faith in the players you have. That's all you can do. We don't take any excuse from injuries.

"It is tough and it is a challenge but we have good players here and they have to believe in themselves, go out and deliver our game.

"We have this ambition here that we are going to stay in the fight and get stronger as the year goes on."