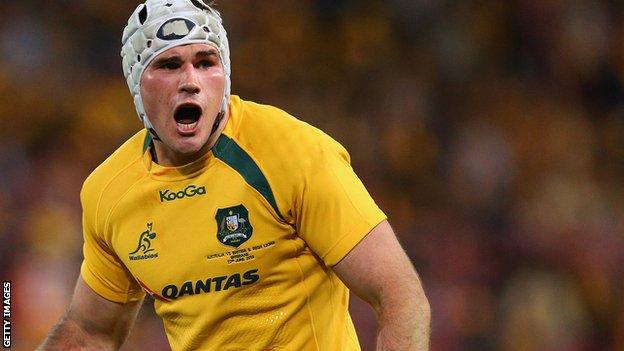 Ben Mowen replaces James Horwill as captain of Australia for Saturday's meeting with England at Twickenham.

The back-row forward, 28, made his Test debut against the British and Irish Lions in June and will lead the Wallabies for the second time.

"By his own lofty standards, James would admit he hasn't been at peak form," said McKenzie.

"We've made the decision to remove the added pressures and responsibilities of being a captain this week so that he can focus entirely on bringing his 'A' game.

"There's no doubting James is a world-class leader but it's important he is putting his own personal performance first and playing to the level we know he is capable of on a weekly basis."

Mowen, who led Australia previously during their 14-13 home win over Argentina in the recent Rugby Championship, moves to number eight for Saturday's Test.

Nick Cummins, a try-scorer in Australia's 20-14 victory at Twickenham last year, returns on the wing after recovering from a fractured hand.

Matt Toomua retains the number 12 jersey ahead of ACT Brumbies team-mate Christian Leali'ifano, who has to settle for a place on the bench on his return from an ankle injury.

Fly-half Quade Cooper, back in favour under McKenzie after being left out by his predecessor Robbie Deans, is made vice-captain.

"We're recognising Quade for the ongoing decision-making role he plays on the field and the positive involvements he continues to make in contributing to the culture of the team off the field," McKenzie added.