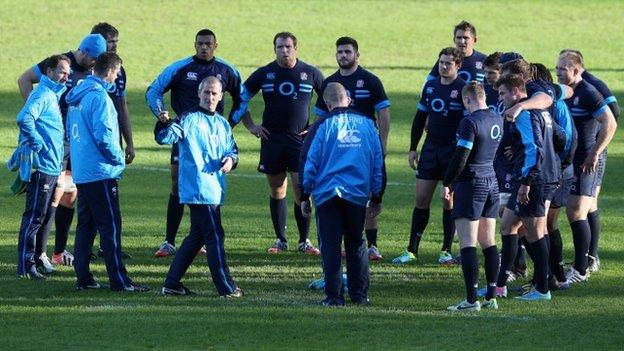 Old foes England and Australia lock horns to compete for the Cook Cup in the first of the autumn internationals, with both sides having much to prove after a challenging 2013 so far.

England coach Stuart Lancaster has his Lions players back in the fold - after their second string trounced Argentina in their absence over the summer - for the first since time since their galling humiliation against Wales in March.

With a World Cup on home soil now less than two years away, Stuart Lancaster knows that serious questions marks will be asked of his tenure if they fail to win at least two of their three matches this fall.

"No-one at open-side is playing better than Chris Robshaw is and so his selection as captain is massively justified. If England lose, he will get some stick again but the facts are there for everyone to see. There isn't another open-side playing out of his skin and demanding the shirt - if there was, he'd be playing instead of Robshaw."

Australia pose a fascinating challenge. They have endured a tumultuous year that has seen their players manage just three wins out of 10 on the pitch, but be the subject of hundreds of column inches off it.

Unpopular coach Robbie Deans lost his job, as much for the agonising series defeat by the Lions, as for the way he allowed certain members of his squad to openly flout his authority. New coach Ewen McKenzie came in prior to the start of the Rugby Championship and has tried his upmost to reinstall discipline to a squad that had spiralled out of control.

Mercurial back James O'Connor was the first to be jettisoned for a series of misdemeanours and this week signed for London Irish in a bid to move away from the glare of the Australia media and get his career, and life, back on track.

Mauled by the Lions in the decisive third Test, the Aussies barely laid a glove on South Africa and New Zealand in the Rugby Championship, and shipped a total of 115 points in three matches against the All Blacks this year.

However, in the last match of the tournament they scored a record 33 points in defeat in Dunedin to add to the 54 they scored the previous week against Argentina, indicating that the roots of recovery are starting to poke through. Quade Cooper, a man who was often at the epicentre of the Wallabies soap opera, made headlines for the right reasons in those matches and has been elevated to vice-captain.

His half-back partnership with Will Genia flourished under McKenzie at the Queensland Reds, when they won the 2011 Super Rugby title, and are key to this new-look, well-behaved, Wallabies squad.