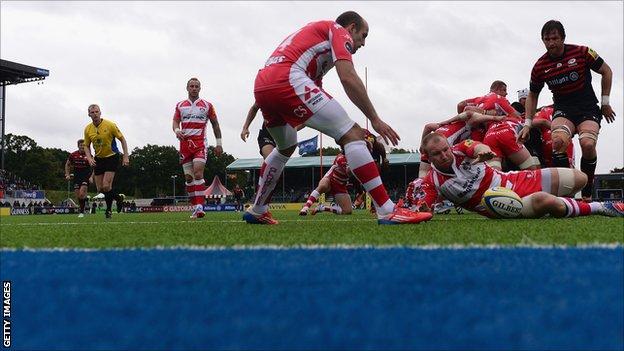 Newcastle Falcons director of rugby Dean Richards is confident his players can cope with the artificial surface at Saracens' Allianz Park home.

Falcons play on grass at Kingston Park, but are accustomed to a third-generation synthetic pitch at Druid Park for their training sessions.

"This pitch is nothing new to us," Richards told BBC Newcastle.

Sarries moved into their new home midway through last season after spells at Watford Football Club's Vicarage Road and previously at Enfield, ending more than 15 years without a permanent home.

was the third success of the campaign, lifting Falcons to eighth in the Premiership.

One factor behind the result was the absence of international players preparing for the autumn international series which begins this weekend.

Fly-half Owen Farrell, centre Joel Tomkins and the increasingly influential Vunipola brothers - Billy and Mako - are just four of the players unavailable for Sarries this weekend.

"They've built a very good squad within the salary cap, they've done extremely well to recruit the players they have," Richards added.

"I think with the strength in depth they have they can slot people in. It's going to be interesting. They've got a few key individuals away and a couple who are injured.