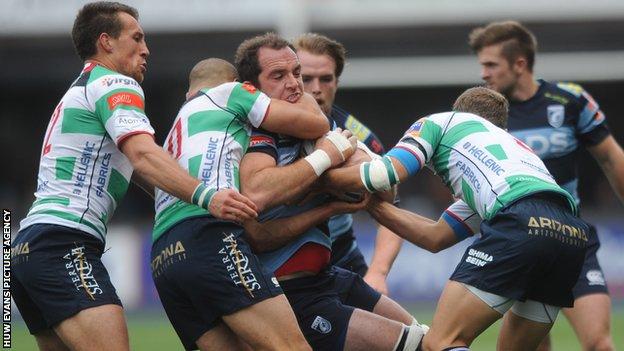 Sam Hobbs' second-half try saw Cardiff Blues come from behind to beat Treviso in the Pro12 at the Arms Park.

The Welsh side had opened up a 10-0 lead thanks to Kristian Dacey's try and the kicking of Gareth Davies.

But in increasingly poor weather, Blues scrapped hard and were rewarded when prop Hobbs barged over.

The Welsh side had already lost at home to Zebre this season - their first Pro12 win in their history - and will be relieved to have held off a second defeat at home to an Italian side.

Conditions were blustery in the extreme, the posts moving violently in the wind to make life difficult for the kickers.

It was also swirling but the strongest wind seemed to be behind Treviso in the first half, forcing Blues to keep ball in hand.

The home side's adventure paid off when they ran from deep, with a kick ahead from full-back Dan Fish bringing an attacking scrum five metres from the Treviso line.

Blues attacked from the perfect position and were able to work hooker Dacey clear on the right to score the opening try, with outside-half Davies, a match-winning hero in the Heineken Cup against Toulon, able to land the conversion to add to an earlier penalty.

Treviso's Berquist was happy to go for goal from long range. He was successful from just under 50 metres, pushed one wide from just a little further out and then added his second from close range and in front to narrow the gap.

The visitors then took the lead when quick passing opened up space for outside centre Campagnaro to scamper clear, getting closer to the posts to make the conversion easy for Berquist.

Treviso thought they had scored just before half-time only to be denied by a knock-on, but still went in 13-10 ahead at the break.

It was the turn of Blues to press with wind at their backs in the second half and flanker Andries Pretorius was denied a try in the corner by a forward pass.

However, they got themselves back in front as Fish took a kick at pace to set up a try for prop Hobbs, converted by Davies.

The heavens opened, but on the artificial pitch at the Arms Park both sides were able to keep playing attractive rugby although neither side were able to add to their score in the face of some fierce defence.

Cardiff Blues director of rugby Phil Davies was delighted with the way his side dug deep: "I'm very satisfied. It was tough conditions for both sets of players - the wind was pretty fearsome at times and made handling difficult.

"But just generally I was so pleased with our players, the contribution and the effort that everyone made, particularly in defence in the last quarter of an hour was phenomenal.

"They had a pretty full side out and I'm very, very pleased and very proud of the players."