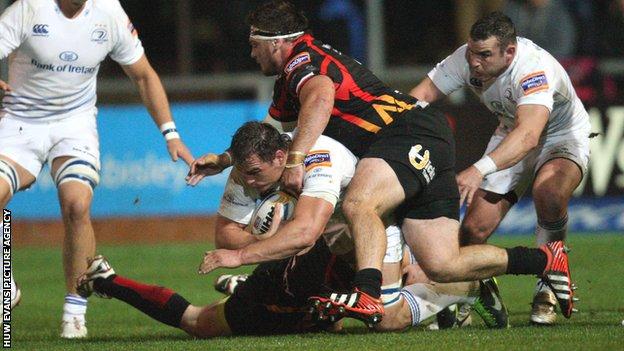 An under-strength Leinster were forced to come from behind to win a hard-fought Pro12 encounter against Newport Gwent Dragons at Rodney Parade.

Ross Wardle's try helped Dragons to a 10-6 half-time lead but the game turned after lock Adam Jones was sin-binned.

Leinster made the most of their man advantage with Aaron Dundon and Noel Reid claiming converted tries.

The Irish side had Jack O'Connell sin-binned but held on as Dragons could only summon two Jason Tovey penalties.

Despite being shorn of 17 players on international duty, Leinster were still able to field four Ireland internationals in the starting line-up.

Leinster dominated the early stages and the Dragons struggled to get out of their own half.

But despite enjoying territorial advantage and the majority of possession the visitors had only one Jimmy Gopperth penalty to show for it, with the former Newcastle fly-half missing his first kick but being on target with his second.

That advantage was squandered as the Dragons - who were missing two internationals themselves - broke out at last and Leinster conceded a penalty, allowing Tom Prydie to bring the home side level with a long-range kick.

Leinster continued to create chances but first Gopperth was just wide with a drop-goal before the New Zealander was denied a try.

Reid looked to have sent Gopperth over but the Leinster centre had been dragged into touch by Prydie a split-second before passing.

Instead it was the Dragons who claimed the game's first try with a flowing move from halfway.

Prydie made ground on the right before passing back inside for the supporting Wardle, with Tovey adding the difficult conversion.

Gopperth did add a second penalty on the stroke of half-time, but the Dragons still held a 10-6 lead.

Tovey and Gopperth exchanged penalties after the restart before Dragons lock Jones was sin-binned for dangerous play at a line-out.

That proved a turning point as within a minute Leinster had taken advantage, with hooker Dundon shunted over from close range for a try converted by Gopperth.

A second Leinster try followed swiftly as Kirchner broke down the blindside before sending Reid away for a converted try to make it 23-13.

Tovey reduced the deficit with a penalty, then added another after Leinster replacement prop O'Connell was shown the yellow card with 10 minutes left for illegally slapping the ball away at a ruck.

Dragons ended the match camped on Leinster's line but could not find the way across it to snatch victory from the defending champions.

Jonathan Evans thought he had scored the try that would have rescued Dragon's unbeaten home record this season.

But referee John Lacey called back the replacement scrum-half for taking the quick tap from the wrong place and Dragons had to settle for a losing bonus point.