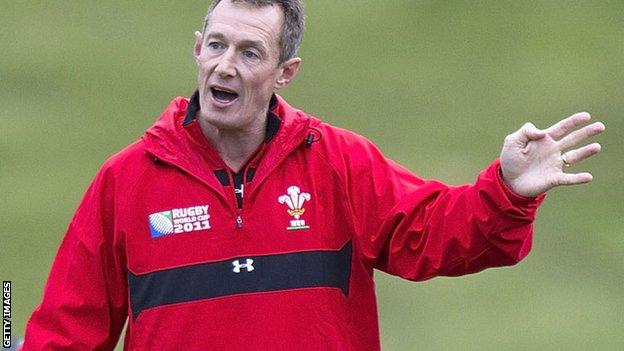 Rob Howley says scrum half Mike Phillips has to get "his own house in order" as Wales prepare to face the Springboks on 9 November.

Phillips, 31, is in camp with the Wales squad following his dismissal by his club Bayonne who accused him of being drunk at a video session.

Attack coach Howley said he could only judge Phillips on his time with Wales.

"It's up to Mike really to get his own house in order and focus on what he needs to focus on," said Howley.

"We can only judge on how Mike is in our environment and as [Wales coach} Warren [Gatland] has said earlier on in the week he was great on the Lions tour.

"You have to act professionally on and off the field, and he has fallen short, hasn't he, on some occasions.

"[But] Mike Phillips is an outstanding player. He's been on two Lions tours, he's got experience and he is vital to our game.

"Having said that, wearing that national jersey is not a divine right.

"Your performance is judged when you come into training and when you put that national jersey on."

The 77-times capped Phillips has instigated legal action in France following his sacking by Bayonne.

He faced the media for the first time since departing from Bayonne, and said it was a relief to be back in the Wales squad.

"It's great to be back in the set up here with the boys and just knuckling down and training hard and making sure I'm in the best shape hopefully for next weekend," said Phillips.

"I'm just disappointed with the way it ended there, and that's that really.

"I don't really want to talk too much about it, my focus here is on Wales. I can't wait to get the kit on and get back out there for Wales."

Phillips would not be drawn on his future in club rugby, but Howley believes the player has along term future with Wales provided he is playing regularly.

"Looking forward over the next two years, we would like to think Mike Phillips will be available for World Cup 2015," Howley said.

"I think that is a realistic target for Mike, and for that to happen he needs to be playing at a club.

"The important void to fill is for Mike to play rugby. Whether that is in Wales, England or France, that his down to his agent and Mike.

"From our perspective, we want Mike to be playing week in, week out."