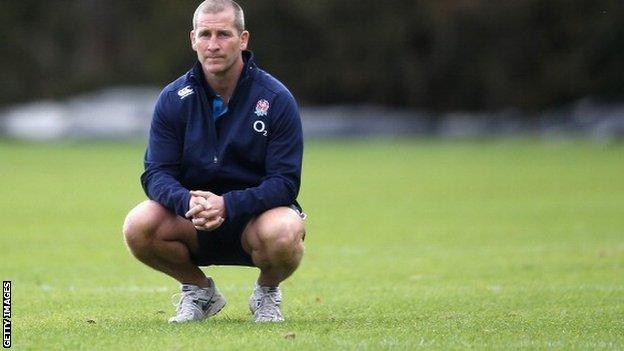 England head coach Stuart Lancaster has described the next 12 months as a "defining year" for his team as the countdown begins to the 2015 World Cup.

Lancaster's men host Australia on Saturday in the first of three autumn internationals during November.

"We can't afford to not hit the ground running," he said. "You don't get second chances at this level.

"We've got to make sure we're up to the mark straight away and we play with the intensity Test match rugby requires."

Australia will be hoping for a second successive win at Twickenham after a 20-14 success in south-west London 12 months ago.

But while England's fortunes fluctuated last autumn - defeat by Australia was followed by a scintillating victory over New Zealand - Lancaster believes his principles are now becoming ingrained in the squad.

"It's a defining year because we're two years out from the World Cup and we have got consistency in the coaching team in terms of selection," added Lancaster, whose team will also face Argentina and New Zealand this autumn.

"We've won seven out of the last eight games, but we've not consistently delivered in every game.

"We've had some good experiences and some not so good, but the good have outweighed the not so good. It's a matter of building on those now.

"It's a big game but one we're ready for and one we should be expecting to go into with confidence."

Captain Chris Robshaw echoed his coach's sentiments by insisting England must transform Twickenham into a "fortress" as they prepare for a World Cup on home soil.

Saturday's match will be the penultimate meeting between the two sides before they face each other at the same venue in the group stages of the World Cup.

"Two years out from a World Cup everyone who comes to Twickenham will be looking to get an edge over us, especially Australia and Wales who are in our group," said the forward.

"It's about making it a really tough place for people to come and play.

However, Sir Clive Woodward, who led England to World Cup victory in 2003, said Lancaster's men should focus on beating Australia and nothing else.

"You can have all these lovely words, but my whole mantra with England was just the next game. I was always going to pick my strongest team, and if we keep winning the next game the World Cup will take care of itself.

"If you keep winning you get this huge momentum and things are pretty good in life. If you suddenly lose a couple of games all this stuff about 2015 goes out of the window so the next game is absolutely crucial."