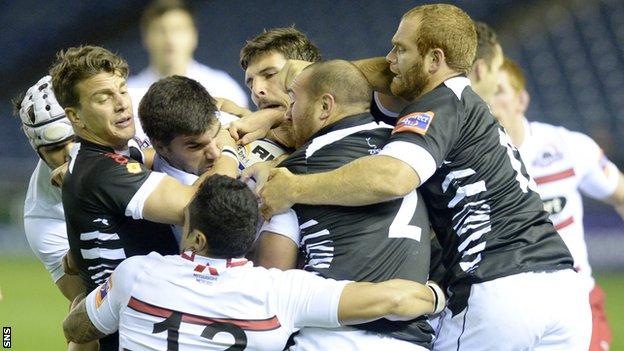 Edinburgh survived a late onslaught from Zebre to make it back-to-back wins at Murrayfield in the Pro12.

Greig Tonks and WP Nel touched down for the hosts in the first half, while Tommaso Iannone and Leonardo Sarto replied for the Italians.

Cornell du Preez scored the only try after the interval to put Edinburgh in front.

Luciano Orquera kicked Zebre to within two points but the fly-half then missed with two drop-goal efforts.

Ross Rennie, making his first appearance of the season as a late replacement, also made a fantastic tackle to prevent what looked a certain score for Brendon Leonard.

It was a fourth home win in five for Alan Solomons' side in all competitions and it was achieved without those selected for Scotland's autumn Tests, including influential skipper Greig Laidlaw.

In contrast, Zebre started with seven of the nine internationals called up by Italy's head coach Jacques Brunel.

Orquera opened the scoring with an early penalty after his opposite Harry Leonard had nudged one wide of the the posts.

Edinburgh then produced an excellent spell with Tonks finishing off an fine run from Dougie Fife and Nel powering over after good work from the forwards.

Leonard knocked over one of the conversions to give the home side a healthy lead.

But Edinburgh were guilty of a major lapse in concentration as Zebre hit back through Iannone before Sarto dived in at the corner from a three-man overlap.

With no television match official for this fixture, the attacking team were given the benefit of the doubt, much to the home crowd's displeasure.

Orquera converted both scores and suddenly the visitors were five points ahead at the halfway stage.

Leonard landed an early second-half penalty, with his task made easier after a 10-yard advancement for some Italian back-chat.

Zebre squandered good possession before Du Preer barged over in the corner from a line-out drive and Leonard landed an impressive touchline conversion.

More ill-discipline allowed Leonard to stretch the lead with a straightforward penalty and former All Black centre Ben Atiga fumbled a golden opportunity for a bonus-point try.

That slip looked costly after Orquera slotted over two penalties either side of Rennie's fabulous tackle.

And Edinburgh cheeks were puffed in relief as the visiting fly-half sent a drop-goal bid wide before his next attempt was charged down in the frantic closing minutes.