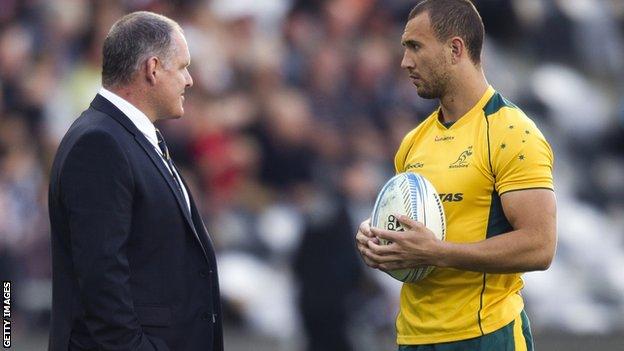 Australia coach Ewen McKenzie says Quade Cooper is in "as good a place as ever" ahead of Saturday's Test against England at Twickenham.

Cooper was ostracised for 11 months under former coach Robbie Deans, but has been recalled by McKenzie, who has also made the fly-half vice-captain.

McKenzie told BBC Sport: "He's been in a good space for 12 months. He's in as good as place as I've ever seen him.

"A bunch of players have spoken about him being a different guy now."

McKenzie, who worked with Cooper at the Queensland Reds, added: "He's been calling the shots on the field for years, but now he has a better balance of how he functions in the team."

Under Deans, Cooper's international career looked as good as over. After last year describing the environment in the Australia camp as "toxic", he was left out of the initial training squad to face the British and Irish Lions in the summer. When six further players were added to the squad, with Cooper again omitted, it appeared he had no future in a Wallaby shirt under the New Zealander.

But Cooper says his time in exile has turned out to be a blessing: "You start looking at what's important in life, and where rugby sits," he said. "It's not just your professional life but your personal life as well, I see all those rolled into one.

"You look at other people, some have a much harder life than you so you've got to be grateful.

"That's what is different for me to a few years ago, sometimes you think you've been hard done by, but you've got to look forward."

And Cooper says being appointed vice-captain shows how much he has changed for the better: "For me it's recognition of the off-field work and sets an example to keep working as hard as possible to be a good team player."

One team-mate delighted to see Cooper back to his best is his Reds half-back partner Will Genia: "I love playing rugby with Quade. I've played with him since I was 15/16 years old," Genia told BBC Sport. "It's a special partnership and a special bond we have."

Genia was dropped for two matches during the Rugby Championship but with the pair now reunited he is determined to make up for lost time, starting at Twickenham on Saturday.

"I'm really looking forward to creating some more good memories and good performances together in a Wallaby jersey," he said.

And Genia says the hurt of losing the Lions series - coupled with a chastening Rugby Championship - means the Australians as a group have a point to prove: "We see this tour as an opportunity to build the culture and environment. We're really looking forward to it. I can't wait."