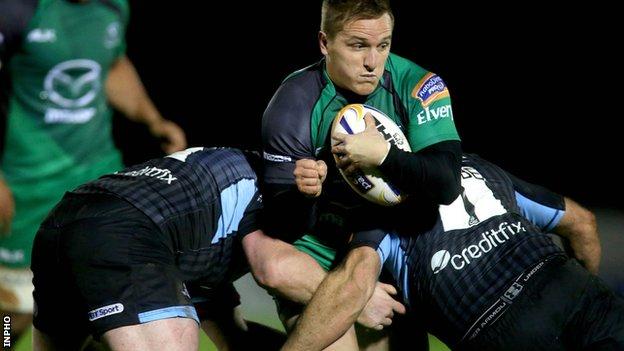 A first-half try from DTH van der Merwe and four Duncan Weir penalties helped Glasgow to a Pro12 victory over Connacht at a windy Sportsground.

Canadian winger Van der Merwe crashed over from close range for the only try after five minutes.

Weir kicked eight points to give the Warriors a 13-3 half-time lead but two Craig Ronaldson penalties closed the gap to just four points.

Fly-half Weir secured Glasgow's win with a penalty a minute from time.

Glasgow had first use of a strong wind and hit the front thanks to Van der Merwe's early converted try, rewarding his forwards for a good early spell of possession.

Warriors centre Mark Bennett tried his luck from a penalty in his own half but dropped it short.

Dan Parks, who lost his Connacht half-back partner Kieran Marmion to a hip injury, responded with a penalty from in front of the posts, but indiscipline and handling errors were beginning to cost the hosts as Weir extended Glasgow's advantage.

A peach of a strike from the 22-year-old, five metres in from the touchline, was followed by a close-in kick in the 33rd minute as Connacht fell 10 points behind.

Pat Lam's side improved approaching half-time, a Park penalty attempt falling short into the wind before the home forwards went close to forcing their way over the try-line.

Kiwi flanker Jake Heenan, one of Connacht's best performers so far this season, set the standard again in terms of work-rate but Glasgow looked comfortable on the resumption.

Parks misjudged the wind when drawing a left-sided penalty wide before he right-footed home from much closer in with 51 minutes gone.

However, Connacht coughed up a cheap three points in return, the Warriors lifting their game and attacking in the 22 with Weir nailing the resulting kick.

Ronaldson fired home an inviting first penalty on his introduction, rewarding the home pack for a lineout steal and strong scrum, and Glasgow were beginning to look frustrated that they had failed to shake Connacht off their tails.

Ronaldson missed a difficult second shot at the uprights but it was his brilliant break which injected some much-needed pace into the Connacht attack entering the final quarter hour.

Although a scrum penalty on the 22 allowed Ronaldson to close the gap to four points, Glasgow were rock solid on restarts and an angled run from Van der Merwe almost led to a second try.

Niko Matawalu was then floored by a late challenge from Mata Fifita, who was sin-binned, as he launched a kick chase and there was no way back for 14-man Connacht, with a 79th-minute penalty from Weir sealing a seven-point Glasgow success.