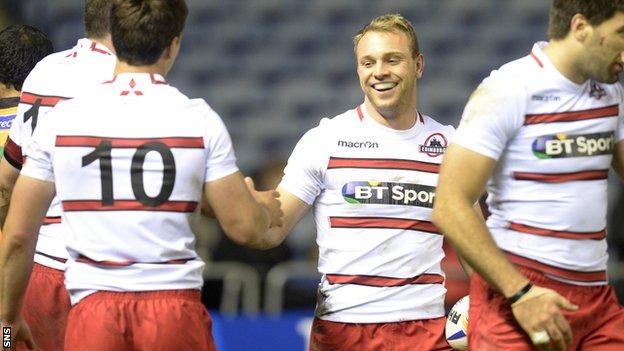 Head coach Alan Solomons could scarcely believe that Edinburgh's narrow Pro12 win over Zebre did not have a television match official.

The Italians were given the benefit of the doubt when Leonardo Sarto went over in the corner late in the first half.

"I think it would have been very difficult to say with any certainty that was a try," said Solomons.

"I think it's absolutely critical in professional rugby that there is a TMO at every single game."

Large screens replayed the action at Murrayfield, including Sarto's score, but the match was not being broadcast for television.

I think we've made tremendous progress in the last two months

"Having a look at the screen, it looked very doubtful," Solomons told BBC Radio Scotland after the tense 25-23 victory.

"The Pro12 is a fantastic competition and we should certainly be having a TMO here.

"We need to move in the right direction and the powers that be need to make sure that going forward that we do have TMOs. It's absolutely vital.

"There are other decisions that can be referred to.

"I thought tonight the offside line wasn't strictly stuck to and that made a huge difference."

Edinburgh held on to secure their third home win of the Pro12 season and Solomons was pleased with the way his team reacted to the loss of those players selected for Scotland's autumn internationals.

"It was tough since a lot of the guys haven't played much and haven't had time to gel," explained the South African.

"But the real positive for me was that we hung in and got he win. I think it's very important that you win those tight games.

"I think we've made tremendous progress in the last two months.

"I've got a very good handle now on what we've got in our squad."