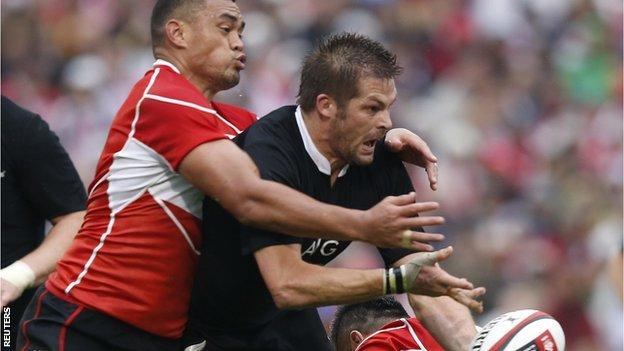 Richie McCaw and Dan Carter both came through their returns from injury unscathed as world champions New Zealand warmed up for their tour of Europe with a 54-6 win away to Japan.

New Zealand took the lead via Charles Piatau but Japan cut the gap to 7-6 through two Ayumu Goromaru penalties.

Sam Cane, Ben Smith and Richie McCaw all crossed to make it 28-6 to the All Blacks at the break.

Fly-half Carter, playing his first game since mid-September after missing the All Blacks' last three Tests, kicked five conversions out of five before being replaced.

Japan almost scored a last-minute try through Kenki Fukuoka but McCaw, playing at number eight on his return to the fray after missing the recent Bledisloe Cup win over Australia with a calf injury, just managed to put him into touch.

"That was payback," smiled McCaw. "He got me good in the first half. I was pretty desperate to stop Japan scoring at the end. Perhaps they deserved to score a try but I got there and I didn't want to be the one that missed."

The All Blacks, who extended their winning run to 11 Tests out of 11 in 2013, play France next Saturday before games against England and Ireland over the following two weekends.

"It felt good from a personal point of view to get through 80 minutes and get the feeling of the game," said McCaw.

"I don't think it's going to take too much to change the mindset for Paris. Next week is going to be a hell of a match so it won't take much to turn the screws."

Despite the big winning margin coach Steve Hansen said he was "disappointed with some of the players". He added: "There were some lessons to be learned, but we scored eight tries so we can't grumble too much."