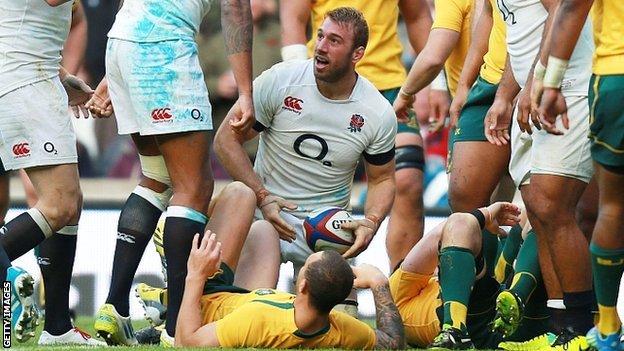 England coach Stuart Lancaster praised his side's composure after their 20-13 victory over Australia at Twickenham.

"You never know how youngsters playing for the first time at Twickenham are going to deal with the situation but I was delighted with their maturity."

"Billy controlled the base of the scrum really well, he wasn't fazed by the occasion," Lancaster added.

"Marland showed power and physicality and was enthusiastic to get his hands on the ball and Joel defended really well at 13."

"Sparked by the coruscating running of full-back Mike Brown, aided by two benevolent decisions from the match officials and powered on by two pieces of opportunism from skipper Chris Robshaw and fly-half Owen Farrell, England turned a seven-point deficit into a seven-point lead and then controlled the remaining minutes with muscular force."

"This is an Australia side that has been together since before the Lions tour and we have got a formidable challenge in Argentina, who have been together throughout the Rugby Championship.

"So we've got to roll our sleeves up, learn, improve on this performance and get another win."

Robshaw, whose try was his first for his country, said any disjointedness from his side was inevitable given that it was the first game of the autumn.

"There's always going to be a little bit of rustiness in your first run-out together," said the Harlequins flanker.

"But it was great to come back in the second half against a team who have played a lot together recently.

"We thought we played in the right areas in the first half but we didn't get the bounce of the ball. And the first time they got into our 22 they came away with seven points.

"But a great run down the left wing by Marland got the crowd behind us and that spurred us on. We kept building the pressure and it started to show. I'm incredibly proud of all the guys."

Man of the match Mike Brown admitted England had work to do but said he was satisfied with his own contribution.

"I was lucky enough to get the nod ahead of so many other great full-backs, including Ben Foden and Alex Goode," said the Harlequins man, who has also been used on the wing by England.

"But I was really happy to show everyone what I could do."