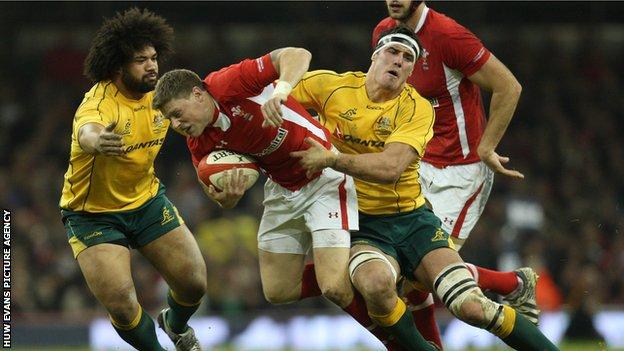 Wales fly-half Rhys Priestland is eager to relaunch his international career after a year away from Test rugby.

The Scarlets star ruptured his Achilles tendon last December in a Heineken Cup match against Exeter, then suffered a recurrence in May.

Priestland, who has 22 caps, admits he wondered if the injury might bring an end to his career.

"I did have a little bit of doubt when the injury happened a second time," the 26-year-old said.

"[Former Wasps centre] Lee Thomas ruptured his Achilles a week before me and he was great, sending me a message.

I feel refreshed and so does my body... it is such a big difference to 12 months ago, when my body was in bits and I did not enjoy turning up to work

"There are different opinions about rehab and he was unfortunate in that he slipped in the bath a few weeks later and had to retire from the game.

"I had that at the back of my mind and worried if there was a real weakness which would mean the end.

"I saw the surgeon and he said I had to extra careful, which is why I took my time."

The injury meant that Priestland missed Wales claiming the 2013 Six Nations title and probably cost him a place on the successful British and Irish Lions tour to Australia.

He had been selected in Wales' 32-man training squad for the two-Test tour of Japan in June, but felt the problem returned just before Scarlets' Pro12 play-off defeat against Ulster in May.

"The toughest thing for me was the game in Ulster when I came back and the injury occurred again," Priestland said.

"The night it went again marked the end of our season. Everyone went out in Belfast and I was stuck in the hotel with no-one to speak to. I just locked myself away.

"All the hard work had not been worth it, it seemed. But after the initial disappointment - I was down for a period - you try to forget about it, enjoy the summer and get back."

Cardiff Blues fly-half Rhys Patchell has also emerged as a Wales contender in Priestland's absence and the trio are all in Warren Gatland's squad for the autumn internationals.

Wales begin their campaign against South Africa on Saturday, 9 November, then face Argentina, Tonga and Australia in Cardiff.

Priestland is hoping to reclaim the starting fly-half spot against the Springboks.

"It has not been the best of years for me, but you have to take the positives," added Priestland, whose last Test appearance came against Australia in November 2012.

"I feel refreshed and so does my body. It is not the easiest to deal with an injury like that, but it is not the end of the world.

"I am just enjoying playing rugby again after being out for so long.

"It makes you reflect on things and you get to realise how lucky you are to be a rugby player and doing something you like.

"I had six weeks off doing nothing at all and that was probably the best thing for me, because I came back refreshed and I look forward to turning up to training.

"It is such a big difference to 12 months ago, when my body was in bits and I did not enjoy turning up to work.

"It was a drag getting through training and games, but now there are no issues at all now and it is nice getting out of bed in the morning with your body feeling normal."