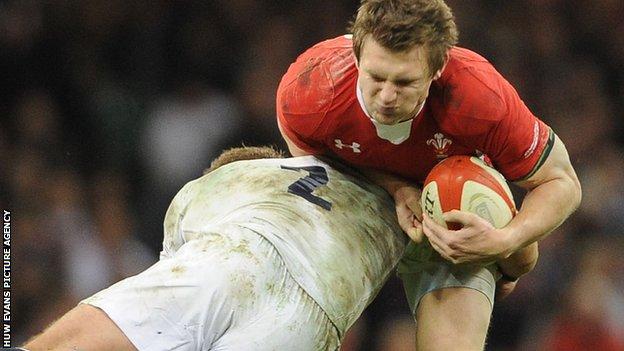 Ospreys number 10 Biggar helped guide Wales to the Six Nations title earlier this year after Rhys Priestland was ruled out with an Achilles injury.

"Personally I'd start with Dan in the type of tactical game that Wales played last year," said Davies.

"It's a tough one. I think both Dan and Rhys Priestland are playing well.

"It's clearly between those two because Hooky [James Hook] I think will be on the bench."

Wales begin their autumn campaign against the Springboks in Cardiff, with matches against Argentina, Tonga and Australia to follow.

They lost all four of their autumn internationals last year, but won the 2013 Six Nations title with Biggar at fly-half.

And it is those performances which Davies believes give the 24-year-old the edge.

"I thought Dan played exceptionally well in the last Six Nations and maybe deserves to keep his place," added Davies.

"I think it all comes down to whether he [Warren Gatland] wants to play the whole Scarlets midfield. That's one thing - they all know each other - that may go against Dan Biggar.

"But whoever he picks it's nice that he's picking on form. They're all playing well."

With Jamie Roberts ruled out because of injury, it is expected Scott Williams will come in to complete an all-Scarlets centre partnership with Jonathan Davies.

Gatland is set to name his team to face South Africa on Tuesday.