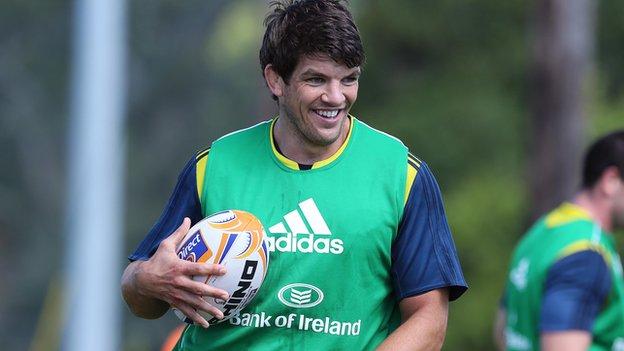 Irish international second row Donnacha O'Callaghan has agreed a new two-year contract which will see him remain a Munster player until June, 2016.

O'Callaghan is the Irish province's most capped forward and made his 230th appearance against the Ospreys in a Pro12 game at Thomond Park on Saturday.

The lock is now in line to surpass Ronan O'Gara's all-time leading tally of 240 Munster appearances.

A number of Munster players have been linked with possible moves to France.

Ireland internationals Paul O'Connell, Conor Murray and Donnacha Ryan, all out of contract in June 2014, are understood to be attracting attention from French Top 14 outfits.

O'Callaghan has played 90 times for Munster in the Heineken Cup and has earned 94 caps in a distinguished career with Ireland.

"I love playing for this team and representing my home club and supporters each week," said the 34-year-old.

"Running out for Munster is something I've always wanted and I've been fortunate to make my career out of it, and to continue doing so for the next few years is just what I want.

"The main thing for me is that I still enjoy it and I have the opportunity to do it."

Head Coach Rob Penney commented "We are lucky to have someone of Donncha's calibre and experience commit his future to Munster Rugby.

"He is great with the younger lads and drives everyone on. His own dedication and work ethic are an example to all and it's good to know he is on board for another two seasons."

Munster are currently top of the Pro12.