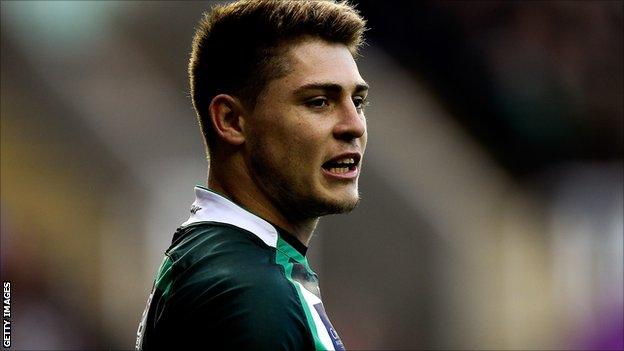 London Irish director of rugby Brian Smith has paid tribute to James O'Connor after his impressive debut for the club against Northampton.

Australian O'Connor marked his debut by setting up Sailosi Tagicakibau to score but it was not enough to stop them being defeated 19-14 by the Saints.

"The speed of the game was very surprising. I thought Super Rugby was fast but I was really blowing out there, that's for sure.

"It felt great. The club and all the boys have been awesome since I arrived and I am really looking forward to my time here.

"I didn't feel 100% and can get better. I wanted to perform. It was one of the best pitches I have played on. It was just a shame we could not get the win."

The full-back, 23, left his homeland to resurrect his career after a series of off-field problems.

"I thought he was outstanding," Smith told BBC Radio Berkshire.

O'Connor, who has amassed 223 points from 44 caps, had his contract with the Australian Rugby Union torn up following his alleged drunken behaviour at Perth Airport earlier this year.

However, he took to his new environment in the northern hemisphere well, with his rugby skills indicating his signing could prove a real coup for Irish.

"The boys have welcomed him with open arms," added Smith. "He is one of the boys already, we are very tight here.

"He has been living out of a suitcase for the past week, but has been round to a different player's house each night and is already part of the family,"

O'Connor set up Irish's lone try from wing Sailosi Tagicakibau, and fly-half Ian Humphreys kicked the rest of the points as the hosts managed to secure a losing bonus point to help their cause near the bottom of the table.

"He was outstanding, he is a class act and a great kid," added Smith.

"His impact on the pitch was significant. He is a typical 23-year-old, he is a young bloke who has made some mistakes.

"He is super talented and a lovely bloke. He has a positive effect on a lot of people and does a bit of charity work and I think in the course of time all that will come to the fore.

"He has been dealt a pretty crook hand down under and it wouldn't happen here. I am grateful to have him here."