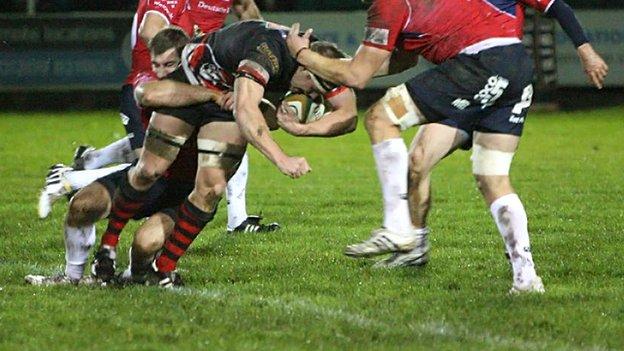 Cornish Pirates head coach Ian Davies said his side's 16-8 win over London Scottish was the result of an exceptional display by his team's pack.

The victory helped them to a win which left them in fifth place in the table.

"Rarely is a game not won up front. I thought the front row was outstanding but it was an eight-man effort," he told BBC Radio Cornwall.

"Our set-piece was pretty good and meant they didn't get much chance to hurt us with ball in hand."

Davies said the quality of the London Scottish pack - which featured the likes of Mark Bright and former Ireland flanker Neil Best - meant his side had to raise their game.

The fact they left with nothing was important

"Early on, the scrums were six of one and half a dozen of the other but we came through that and the line-out was pretty good, except for a couple at the end which faltered," he added.

"I thought it was a good game of rugby, played by two sides who know and understand the game.

"There was enough in it for the rugby purist and also for the more fickle supporter, who wants to see end-to-end stuff.

"There were two good defences and a contrast in styles. Both sides had the ambition to try to move the ball but maybe a lack of accuracy on both sides stopped a few more tries.

"We spoke about trying to move the London Scottish forwards around because they are a big pack and we did that. Sometimes we could have kicked a bit better out of hand but I'm nitpicking."

Davies said he was also pleased to have denied the Exiles a losing bonus point by establishing an eight-point winning margin.

"The fact they left with nothing was important," he said. "The defensive effort and the set-piece effort was really good to keep them out.

"They tightened up with the loss of their scrum-half so we had to make sure we didn't give them any platform in our 22 to pick and go and get the maul going, and I thought we did that very well."