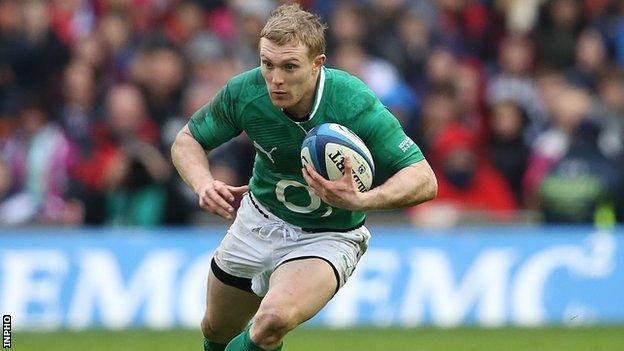 Keith Earls has been ruled out of Ireland's opening autumn international against Samoa at the Aviva Stadium on Saturday with a knee injury.

The Munster man has been suffering from patella tendinitis, a common injury among professional rugby players.

Earls remains in the frame to play some part in the other November Tests against Australia and New Zealand.

Paul O'Connell, Cian Healy and Sean O'Brien are all expected to take part in a squad training session on Tuesday.

O'Connell is regarded as a strong candidate to captain Ireland, so his return will be a major boost to new coach Joe Schmidt.

Leinster back row O'Brien has been struggling with an ankle problem, while Cian Healy has been trying to overcome knee trouble.

Earls, 26, has been in fine form for his province so far this season.

While he misses out, Jonathan Sexton has been passed fit, despite being involved in a heavy schedule of matches with Racing Metro in the Top 14.

The fly-half was an unused replacement in his club's defeat by Biarritz on Saturday.

Andrew Trimble, Donncha O'Callaghan and Roger Wilson are back training with the squad after being released to play for their provinces at the weekend.

The trio were not part of the initial party named by Schmidt, but were called up to take part in training last week.

The Irish and Samoan teams will be named on Thursday.