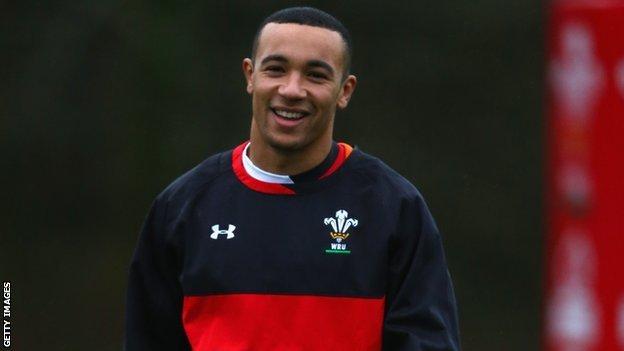 Wing Eli Walker will make his Wales debut in the opening autumn international against South Africa at the Millennium Stadium.

The Ospreys back, 21, replaces the injured Alex Cuthbert (ankle) on the right wing.

Scarlets' Rhys Priestland is selected at fly-half ahead of Dan Biggar.

Eli has impressed for his region and whilst with us

On the other wing to Walker is George North, who made his debut against the Springboks three years ago, scoring two tries.

Coach Warren Gatland has selected Walker ahead of the Scarlets' Liam Williams, who is on the bench.

"Eli has impressed for his region and whilst with us and it's a great opportunity for him to make his mark in a very experienced side," said Gatland.

Walker returned to action at the start of the Pro12 season after a six-month injury lay-off.

He was tipped to win his first cap for Wales after being included in the squad for the 2013 Six Nations Championship.

But a back injury which required surgery meant he missed the tournament, and Wales' summer tour of Japan.

Cardiff Blues prop Gethin Jenkins will win his 99th cap and is joined in the front row by Richard Hibbard and Adam Jones.

The back row is an all-British and Irish Lions affair with Racing Metro flanker Dan Lydiate playing alongside captain Sam Warburton (Blues) and Dragons' Toby Faletau.

Lydiate, who missed most of last season with an ankle injury, lines up for Wales for the first time since the summer of 2012.

Gatland said: "Since we have been together, competition in the squad has been good and it is great to have both Rhys and Dan back available for us."

Mike Phillips will partner Priestland at half-back and the midfield is made up of the Scarlets centre pairing of Scott Williams and Jonathan Davies, with Jamie Roberts absent through injury.

"We always say we like to test ourselves against the best and Saturday is going to be just that with a huge game against South Africa first up," said Gatland.

"The Springboks arrive in the UK off the back of their impressive Rugby Championship campaign and we know that we need to start well on Saturday.

"We go into the series as Six Nations champions but we are looking forward to testing ourselves against the southern hemisphere sides and showing what we can do."