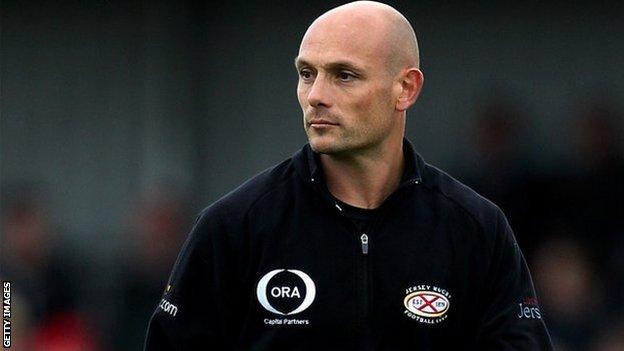 Harvey's side trailed just 19-16 at the break, but saw the game ebb away from them in the second half.

"The lads were fantastic in terms of spirit but unfortunately the line-out fell apart a bit as did the scrum.

"It was a vast improvement from last week in terms of the heart and desire," he told BBC Radio Jersey.

Harvey said his side's defensive effort had been particularly impressive against the team lying in third place in the table.

"Defensively we were superb and we showed some desire in attack to open them up," he continued

"It's a bit disappointing, but the character shown by the lads was impressive.

"They're very strong at home and I'd love to have got a bonus point. We could have sneaked a win, but it wasn't to be.

"There's some trust growing in the group. They came off the pitch and looked each other in the eye and thought we could and should have won that, but it certainly wasn't down to lack of effort."