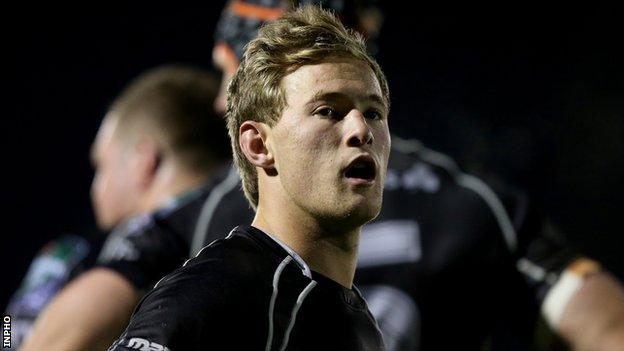 Connacht have received a boost after their highly-rated scrum-half Kieran Marmion agreed a two-year contract extension with the Irish province.

Marmion, 21, was named in the Ireland squad for last summer's tour of North America although he remains uncapped.

The English-born player's new deal will keep him at Connacht until at least the summer of 2016.

Marmion has represented Ireland at youth level and is now on the fringes of the country's senior squad.

He is currently behind Conor Murray, Eoin Reddan and Isaac Boss in the Irish scrum-half pecking order but that may not remain the case for too much longer.

After spending only one year in the Connacht Academy, Marmion made his first competitive start for the province in last season's Pro12 opener against Cardiff Blues and went on to start every game during the campaign.

Indeed, Marmion hasn't missed a game for Connacht since his debut 14 months ago and he has scored three tries in his 36 matches.

Connacht coach Pat Lam described Marmion as a "fantastic player and a key member of our squad".

"It's a real boost that he sees his continued development and future with the club he started his professional career with," added Lam.

"From day one, Kieran has impressed me with his attitude, work ethic and incredible maturity and I have no doubt that he will go on to achieve great things within Connacht and Irish rugby."