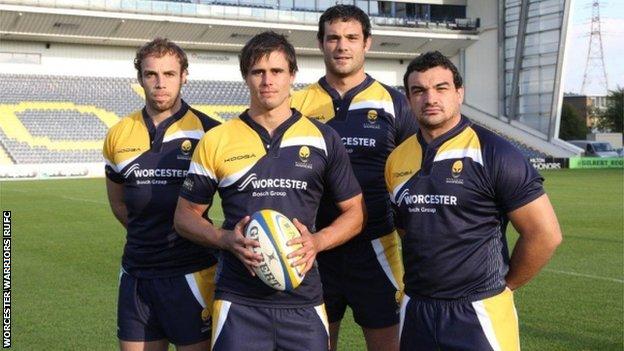 Worcester Warriors boss Dean Ryan is hoping that he may still have use of some of his Argentine players despite the autumn international season hotting up over the next three weeks.

Friday night's 21-6 defeat by Bath was the first time that all four Argentines had been available to Ryan this season.

But three of them - Mariano Galarza, Agustin Creevy and Leonardo Senatore - have been called up again by Argentina.

"They're taking some of them, but we're just negotiating," said Ryan.

"Or rather they are doing the negotiating."

Lock Galarza and hooker Creevy were both late arriving at Sixways this autumn due to their involvement with Argentina in the southern hemisphere's Rugby Championship, while flanker Senatore would have been involved but for a seven-match biting ban,

Galarza is the only one of Worcester's four Argentines in the team to face England at Twickenham this Saturday, but Creevy and Senatore, available again after suspension, are in the squad to face Wales in Cardiff on 16 November and Italy in Rome on 23 November.

Stand-off Ignacio Mieres was not called up, but Ryan is still to discover exactly who he will have available for his winless side's two Friday night Anglo-Welsh Cup ties at Cardiff this week and at home to Leicester on 15 November, and the return to Premiership action at Sale the following Friday night (22 November).

"I think Senatore stays with us next week," Ryan told BBC Hereford & Worcester. "But Gus Creevy has hurt his knee, so we'll wait and see what happens.

"We've now got a pretty fearsome scrum and they did superbly on Friday night against Bath, one of the supposedly feared packs in the Premiership. But good players make a big difference. It's not rocket science. And we still lack power as ball carriers."

Worcester's latest defeat, 21-6 at home to Bath, means that their current losing run is now the Premiership's worst in almost 15 years, since Bedford also suffered 12 straight defeats between October 1998 and January 1999.

The Warriors are now without a win in 14 matches in all competitions since beating Wasps on 1 March, with the 9-9 Challenge Cup draw at Oyonnax last month the only game so far that they have not lost in their nine games under Ryan.