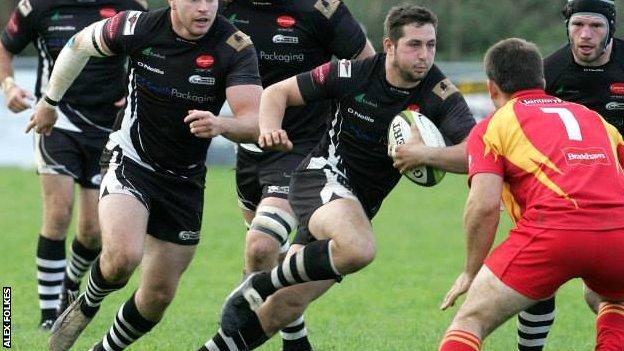 Launceston coach Cliff Rainford says his side have a "psychological issue" with away fixtures after their latest defeat on the road.

The Cornish All Blacks suffered a shock 45-22 defeat by bottom-of-the-table side London Irish Wild Geese, their fourth straight away loss.

"I think it's a psychological thing and if we can get on top of that then we'll be fine," he told BBC Radio Cornwall.

"We don't need to push the panic button. We have to believe."

Launceston have won all four National League Two South games at home, including victories over Hartpury College and Canterbury, the top two sides in the table.

"It's still early in the season, but we've got to have a look at these away fixtures," said Rainford.

"We've got to be pragmatic about it and say it was a windy day and perhaps we didn't get on top of the game early enough. It's a long trip and we left home at seven o'clock in the morning.

"We've got to keep going the way we are. We get a lot of negatives in the press because we've lost four away games and won four home games.

"But this time last year we'd lost six games, so we're in a better position than we were last year and sort out our away form and move on."