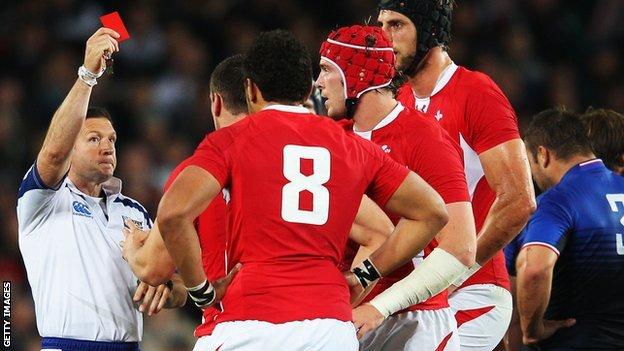 Coach Warren Gatland will not take up the opportunity to meet referee Alain Rolland before Wales' match against South Africa on Saturday.

Irishman Rolland will officiate his first Wales game since sending off captain Sam Warburton in their 9-8 2011 World Cup semi-final defeat by France.

Coaches are given the opportunity to meet referees before a Test.

But BBC Sport Wales understands Gatland, who said he was "gutted" by Warburton's dismissal, will not do so.

Warburton, who was shown a red card for a tip tackle on Vincent Clerc, later said Rolland's decision was correct.

The referee stood by his decision to send off the player who went on to lead the British and Irish Lions to a 2-1 series win over Australia in 2013.

In the meantime, Warburton has helped lead Wales to Six Nations titles in 2012 and 2013.

Coaches can seek clarification of interpretations of the game's laws with match referees before Tests.

Responding to the then England backs coach Brian Smith's assertion, Gatland said: "The meetings are commonplace and something that, in my experience as an international coach, often prove invaluable.

"We tend to talk mainly about how we want to play the game and also listen to the referee's views."