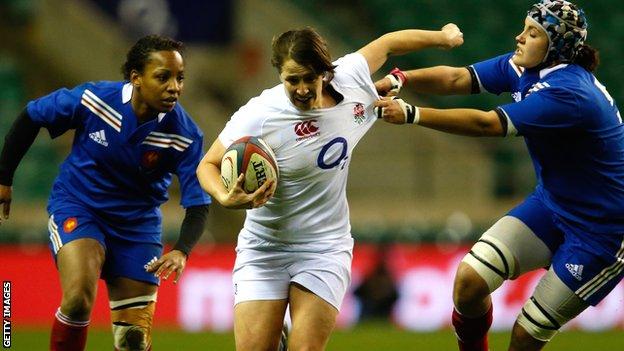 Katy McLean will captain England Women for the first time in 12 months as they begin their autumn fixtures against France at Twickenham on Saturday.

The 27-year-old Darlington Mowden Park fly-half, who has 62 caps, will lead the team as Sarah Hunter is injured.

Margaret Alphonsi returns having been out since March 2012 through injury.

This is going to be a seriously tough test

Emily Scarratt, Katherine Merchant, Danielle Waterman and Heather Fisher are injured and will also miss the match against Canada on 13 November.

Bristol prop Sasha Acheson starts on the bench against France and will win her first cap if she comes on.

England head coach Gary Street said: "We are heading into this series with a handful of injuries but we have got an experienced pack and a lot of pace in our backline.

"Playing France is going to be a tough and physical game but I am very excited about our flanker combination of Marlie Packer and Maggie Alphonsi. We've had some good results without Maggie but undoubtedly she adds quality through her experience and knowledge.

"Katy last captained England a year ago in our successful autumn international series against New Zealand and she brings a wealth of experience and quality both on and off the pitch."

England lost 30-20 when they last played France, in the Six Nations in February, while Canada ended their defence of the Nations Cup with a 27-13 victory in Colorado in August.

Street added: "This is going to be a seriously tough test for us. France got a good win over us last season and they have just defeated Canada at the weekend, but a tough test is exactly what we want as we continue to build towards the Rugby World Cup next season."