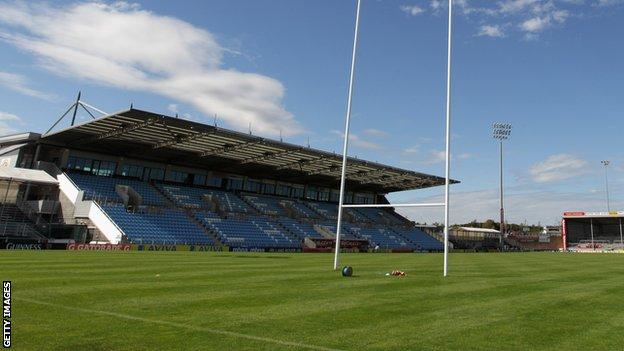 Sandy Park, the home ground of Exeter Chiefs, has been chosen to host this season's LV= Cup final on 16 March.

The stadium, home to the Chiefs since 2006, has been chosen despite being one of the smallest in the Premiership, with a capacity of only 10,700.

It is also set to host three Rugby World Cup fixtures in 2015.

The tournament pits the 12 Premiership clubs against the four leading Welsh regions, with the opening round of games taking place on Friday.

"This will make a great venue for the final," former England captain Lewis Moody, an ambassador for the tournament, told BBC Radio Devon.

"The success that has come to this part of the country is well deserved due to the way the Chiefs play and train.

"To win silverware is top of your priority list every year - teams like Exeter need to push and the LV is a great opportunity for them."

Worcester Warriors' Sixways Stadium, which can hold 12,024 spectators, has hosted the final for the last two years, with Harlequins lifting the trophy last season after a 32-14 win over Sale Sharks.

"We are thrilled to have been selected as the venue [for the final]," added Chiefs owner Tony Rowe.

"As rugby supporters know, Sandy Park is a great match-day experience and we've no doubt that will be evident when the LV= Cup final is held here.

"We look forward to welcoming all fans to the west country for what will be the first silverware of the season."