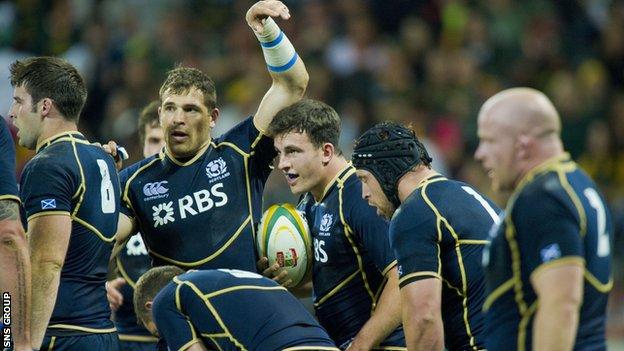 It appears that the only surprise of Scott Johnson's XV for the match against Japan is that there are no surprises.

Continuity of selection is apparent, coming off the back of the last minute victory against Italy in the summer, along with the addition of a couple of players who were unavailable either through Lions selection or injury.

So what can we read into this?

Firstly, it shows that that Japan are rightfully being given the respect that they merit.

Over the past few years, the Japan club scene has welcomed players of the highest pedigree - Ma'a Nonu, Fourie du Preez, Jacques Fourie, Shane Williams to name a few - and this has without doubt raised the standard and intensity.

It shows that although blooding of players is important, winning is a habit that Johnson wants his men to learn

Add to that world renowned coach of the calibre of Eddie Jones - who is sadly recovering in hospital after a stroke - and, previously, John Kirwan, and suddenly you appreciate why Scotland have named a strong XV.

Secondly, it shows that although blooding of players is important, winning is a habit that Johnson wants his men to learn.

Through the continuity of selection and the familiarity in the units from the club game (Glasgow locks Tim Swinson and Al Kellock, Edinburgh centres Matt Scott and Nick De Luca for example) he is going about it the right way.

Finally, it uncovers a key unit that Johnson sees as his long term plan.

Who are the key players in a team? I'd suggest the middle five - back row and half backs.

These five men - Kelly Brown, Alasdair Strokosch, David Denton, Greig Laidlaw and Ruaridh Jackson - are the ones that will run the game and through their performances over these autumn internationals will hope to provide the rock on which this team is built.

But what does this selection mean for the next two internationals?

I have it on good authority that the players have been told that the vast majority, if not all, of last week's 41-man squad will get an opportunity of game time over this three-Test period.

This means that the likes of Jonny Gray, who I'm reliably informed runs a great line-out, and Mark Bennett, will get a taste of international rugby against at least one of the southern hemisphere giants.

The message here is perhaps: 'lets see what you can do against the big boys', where the management will learn an awful lot more about these young players.

The Japanese will pose problems, of that there is no doubt.

Pace is the key to their game; the swift movement of the ball from the breakdown by Otago Highlanders scrum-half, Fumiaki Tanaka, the raw pace of the back three or the accuracy and intensity of their chop tackle, all contribute to the flavour of Japanese rugby.

How will Scotland win this game?

Find a game plan that will beat the team in front of you.

They will look to sap the energy of their opposition through the power game.

Scrums and driving line-outs will be key to gain field position and possession - don't get bored of the tactic but be open to subtle changes to catch them unaware.

Dummy a drive and attack the fringes. Don't kick loosely and don't run in isolation.

On the back of kick receipt they will hope to counter attack with purpose.

Statistics suggest that the counter attack provides the most attacking opportunities - far more so than the set piece - and the back three of Sean Lamont, Tommy Seymour and Sean Maitland have the firepower to make the most of it.

I look forward to an exciting game.