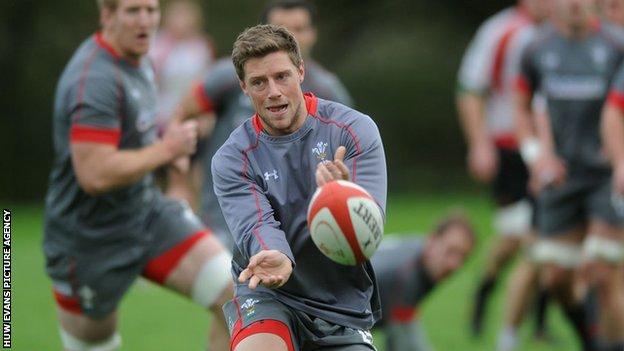 Fly-half Rhys Priestland says he is determined to enjoy his return to the Wales side after nearly a year sidelined with injury.

The Scarlets playmaker replaces Dan Biggar of the Ospreys in the team to face South Africa.

Priestland missed the 2013 Six Nations title-winning campaign due to an Achilles tendon injury.

"I am back fully fit and that's all I'm concerned with," said Priestland. "It has been pretty difficult."

He ruptured his Achilles tendon last December in a Heineken Cup match against Exeter, then suffered a recurrence in May.

Priestland, who has 22 Wales caps, had feared the injury might bring an end to his career.

"Thankfully, it is my first serious injury and it's part and parcel of the game these days," he added. "I have come through it now and I am just enjoying my rugby."

As well as missing the 2013 Six Nations title win, Priestland was also ruled him out of a place on the successful British and Irish Lions tour to Australia.

He was selected in Wales' 32-man training squad for the two-Test tour of Japan in June, but felt the problem come back just before Scarlets's Pro12 play-off defeat against Ulster in May.

Priestland returns to the Wales side ahead of Biggar, Perpignan's James Hook and Cardiff Blues's Rhys Patchell.

"I sat out a lot of last season and was really pleased for the squad and Dan how things went in the Six Nations," said Priestland.

"I thought he [Biggar] was outstanding and we all know what Hooky brings to the squad - he is one of the most talented players we have got in Wales.

"I am just delighted to be starting ahead of them."

Priestland, who guided Wales to the 2012 Six Nations Grand Slam, says he did not miss playing until he saw Wales' 30-3 victory against England at the Millennium Stadium.

"I didn't miss rugby when I was injured at all until I went to the stadium to watch the Wales-England game," said Priestland.

"All the boys spoke about what a special atmosphere it was and it was an honour for me to be there and to witness it."

Priestland will now be part of an all-Scarlets midfield trio, along with British and Irish Lions centre Jonathan Davies and Scott Williams, who replaces the injured Jamie Roberts.

"We all know how good Jon is and he has proved that time and time again," said Priestland.

"Scott has really upped his game over the last few months, so I am looking forward to playing with those two."