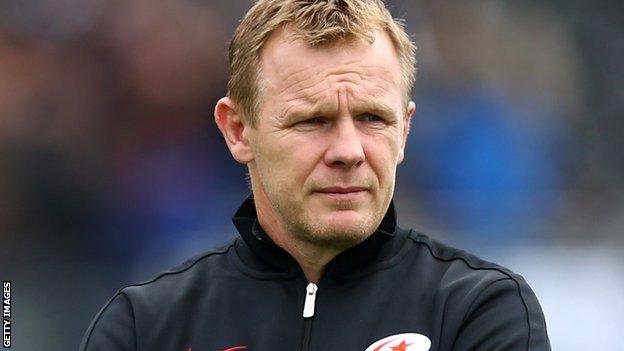 Sarries, who suffered their first league loss of the term against Saints last week, overcame the Falcons 40-3.

"It was very important we responded to last weekend," he told BBC London 94.9.

"The season is so long and when those kind of things happen it is important you get things right. You need to diagnose the problem and not go searching for the wrong things."

Saracens' 41-20 defeat at Northampton last Saturday was the club's heaviest loss since a 46-16 reverse at Leicester Tigers in March 2009.

And McCall was pleased with the bonus-point victory over Newcastle, which kept them top of the Premiership table, two points clear of Saints.

We will rest a lot of our more senior players and expose some of our younger contingent to this competition. For us, that is what it is there for

"We got a bit of hiding at Franklin's Gardens," director of rugby McCall said.

"If it was the kick up the backside we needed, we certainly had a very good training week and completed it with a good performance.

"We built into the game very well and were composed and patient throughout. We played some outstanding rugby in the second half.

"Our scrum was exceptional and our maul defence was at a very high level. Across the board we were good."

The Allianz Park outfit now face London Wasps and Scarlets in the LV= Cup before returning to Premiership action against Exeter Chiefs on 23 November.

McCall says he intends to rotate his side and hand opportunities to younger players in the Cup.

"We have a significant amount of internationals away over the next two weeks and on top of that we have had a lot of people who have played a lot of games," he said.

"We will rest a lot of our more senior players and expose some of our younger contingent to this competition.

"For us, that is what it is there for. We need some of those players who haven't played all that often this year to play against some really good teams.

"We will rest a few and then bunch back up for the Exeter game in three weeks time."