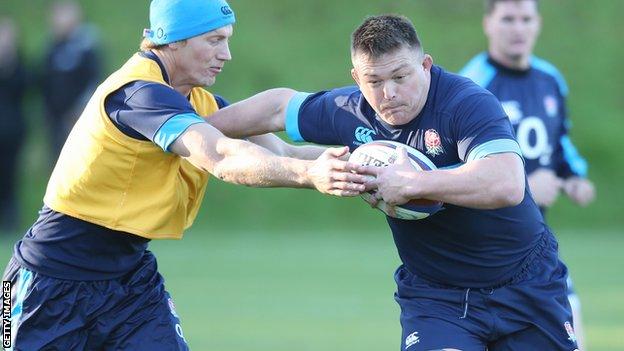 England have made four changes to their starting XV for Saturday's Test against Argentina at Twickenham.

Leicester prop Dan Cole, who has been a fixture in the England side since making his debut in 2010, makes way for Bath tight-head David Wilson.

Ben Foden comes in for the injured Marland Yarde on the wing but Christian Wade is out with a hamstring strain.

Scrum-half Ben Youngs failed a fitness test on a hip injury on Friday and will be replaced on the bench by Danny Care.

England head coach Stuart Lancaster said Wasps winger Wade had been "in contention for a start" but that his hamstring tightened up in training.

On Foden, Lancaster added: "Ben has had a full week's training on the wing, he is a great finisher and in form so it's a great option for us."

Cole and Youngs are included on an experienced replacements' bench, which also sees the return from injury and concussion respectively of fellow British and Irish Lions Alex Corbisiero and Geoff Parling.

Northampton's Corbisiero returns to the squad after overcoming a knee problem, although he had been expected to start the second match of England's autumn series instead of Harlequins' Marler.

Saracens full-back Alex Goode is on the bench to cover the back three, while Bath lock Dave Attwood drops out of the squad.

England beat Australia 20-13 last weekend in the first of their three autumn Tests.