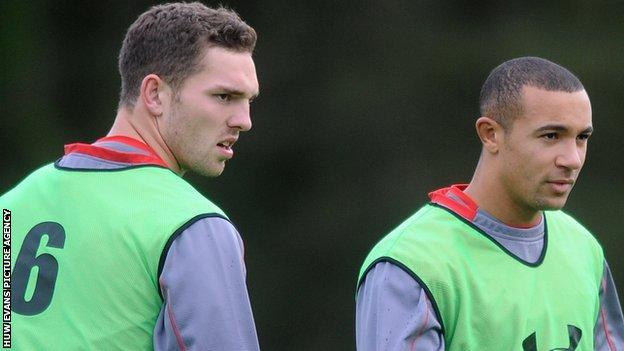 North went on to score two tries on his debut against the Springboks in 2010 and Walker hopes to follow suit.

"Myself and George played together at Under-16 level, then 18s, but then he skipped 20s and went straight into the seniors," Osprey Walker said.

"He is a phenomenal player and to be there training with these guys is great."

However, when it comes to inspiration for his own rise to the international ranks, Walker cites ex-Ospreys team-mate Shane Williams.

"Shane was probably the one I looked up to when I was coming through the academy system at the Ospreys," Walker said.

"He was there then and as soon as I took my first step into senior rugby, he was there as well.

"He helped me settle with the Ospreys. It was a close relationship. He was probably the biggest influence on me rugby-wise."

The Ospreys back replaces the injured Alex Cuthbert on Wales' right wing as the Cardiff Blues man misses out with an ankle problem.

But his Test bow will come later than hoped after he was named in Wales' 2013 Six Nations squad only to be ruled out by an injury that also put him out of contention for the June tour to Japan.

"I worked very hard with the conditioners to get back for the beginning of this season and I am enjoying every moment of it," Walker said.

As a finisher, I back myself against anyone on the pitch.

"It all started with my hamstrings last season. I was rehabbing them and I came back into my first training session and pulled my hamstring again.

"I then had a scan on my back and found out that I had a bulged disc, which could have been related to my hamstrings.

"I had a small operation - they shaved a bit of the disc because it was pressing against the nerve that runs down your leg - and everything is fine now."

South Africa name their team on Wednesday and it could include renowned finishers JP Pietersen and Bryan Habana on the wings.

But Walker is confident he can shine saying: "As a finisher, I back myself against anyone on the pitch.

"I've just got to get my head down this week, work hard and look forward to the weekend.

"The senior guys around me in the squad have been great, saying it is about enjoying and relishing the moment because it goes pretty quickly.

"Obviously, you will be nervous at times, like you are in any rugby game, but it is about enjoying the occasion."