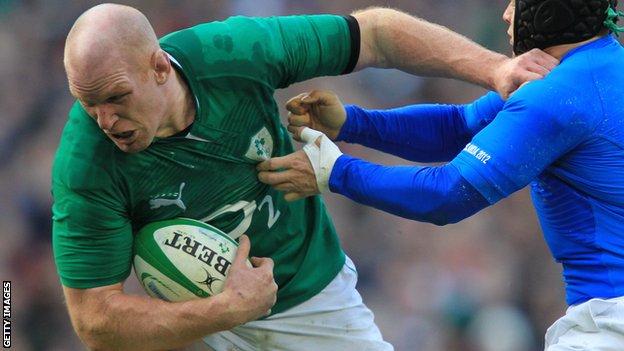 Fitness doubts Paul O'Connell, Cian Healy and Sean O'Brien have been named among the replacements for Ireland's opening autumn Test against Samoa.

New Irish skipper O'Connell has been struggling with a calf muscle problem, Healy has had a knee injury and O'Brien is recovering from an ankle complaint.

Jonathan Sexton is not included in the 23 so Paddy Jackson starts at fly-half.

Leinster prop Jack McGrath is the only debutant in the line-up for new coach Joe Schmidt's first game in charge.

McGrath is one of nine Leinster players named in the starting XV, with six more on the bench, for Saturday's match at the Aviva Stadium.

Dave Kearney could also earn his first cap if he is called into action from the bench.

Rob Kearney is named at full-back, Ulster's Tommy Bowe and Leinster's Fergus McFadden will be on the wings, with centres Brian O'Driscoll and Gordon D'Arcy continuing their partnership in midfield.

O'Driscoll has shaken off his calf injury in time to face the Samoans.

Sexton has been given more time to overcome a stiff hip so Jackson forms a half-back pairing with Munster scrum-half Conor Murray.

"There is a chance that we could worsen the condition of Jonny's hip tightness and a break is a positive thing for him when you consider that the accumulation of games he has played (for Racing Metro) will start to take its toll. That contributes to the wear and tear," said Schmidt.

"If we look after him now, we're confident he'll come back stronger for us, even looking ahead to the Six Nations."

McGrath is joined in the front row by Rory Best and Mike Ross, with Leinster duo Mike McCarthy and Devin Toner in the second row.

Peter O'Mahony, Chris Henry and Jamie Heaslip form the back row, with vice-captain Heaslip assuming the skipper's armband for this game.

"We have picked the team largely on preparedness and shown faith in the group that has spent the most time together on the training field," explained Schmidt.

Keith Earls was ruled out earlier this week with a knee injury, while wings Simon Zebo and Craig Gilroy, and forwards Richardt Strauss, Iain Henderson, Donnacha Ryan and Tommy O'Donnell are longer-term absentees.

Earls remains in the frame to play some part in the other November Tests against Australia and New Zealand.

With another week of training under their belts, O'Connell, O'Brien and Healy are likely starters for the two matches against the southern hemisphere giants.