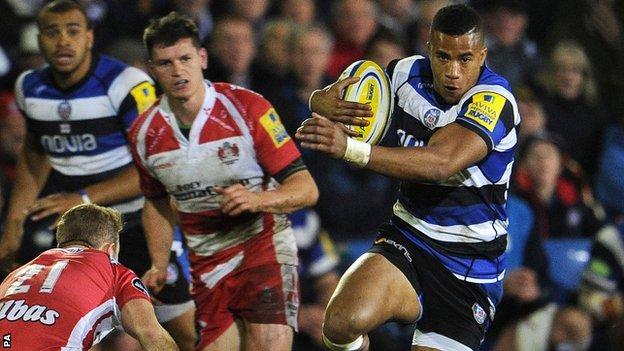 Full-back Anthony Watson will prosper for England, according to his Bath team-mate Nick Abendanon.

Watson was called into Stuart Lancaster's training squad ahead of Saturday's Test against Argentina.

Lancaster said he was keen to "give him a taste of this environment", but the uncapped 19-year-old has now been released back to his club.

"He's got all the qualities and traits that you need," team-mate Abendanon told BBC Radio Bristol:

"If Ant carriers on playing the way he has done for Bath, then I'm sure only good things will come for him."

Abendanon, who has one England cap, has been struggling with injury this season and Watson has impressed in his place.

"All credit to Ant, he's played superb over the last few weeks," added the 27-year-old. "Hopefully he's learnt a lot whilst he's there with England."

Watson joined Bath from London Irish during the summer and has played six Premiership games so far.

He has been involved with the England junior set-up since Under-16s level, and was promoted to the Under-20s side when still only 17.

Watson scored a try in the 33-21 win over New Zealand in this summer's 2013 IRB Junior World Championship semi-final and also featured in the win over Wales in the final.

Bath coach Mike Ford believes the teenager will go on to make his mark in the senior squad.

"Stuart wants to have a look at him and England management rate him very highly. They want to get him integrated in to the environment and the sooner they get him in there, the less nervous he'll become," said Ford.

"Stuart is obviously looking towards the 2015 World Cup and asking whether Anthony will be ready by then.

"He just needs to keep his head down. His move from London Irish has been a big one for him. He's settled really well and is a fantastic character. If he carries on he'll go to the very top."