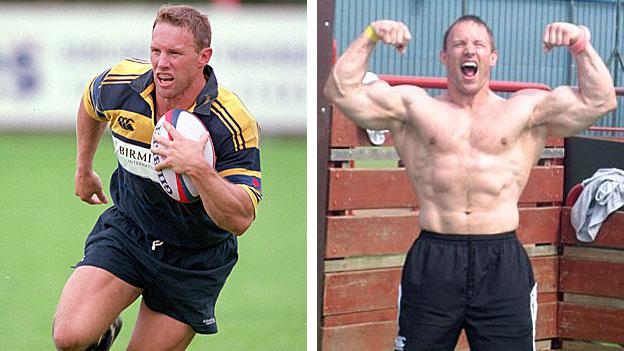 When Alistair Murdoch made his Test debut for Australia in 1993 alongside David Campese and Michael Lynagh, he was a powerful yet lightning-quick winger.

Twenty years later and - like many retired players - his body shape is rather different.

But rather than developing an overhanging belly, the 46-year-old Murdoch is now an even more physically impressive specimen, having just been crowned the World Drug-Free Powerlifting Federation (WDFPF) champion for the third year in a row.

"I was always good at the bench-press, much to the disappointment of a lot of the front rowers who thought they had a monopoly," Murdoch, who now works as a financial advisor in London, told BBC South West Sport.

"But after finishing rugby [in 2007] and being a bit of a competitive soul, I just thought going to the gym for no particular reason wasn't really for me."

Murdoch turned his focus to powerlifting and quickly proved to be an accomplished competitor and embarked on mastering what he calls the "Test cricket" of the sport - lifting in all three disciplines: the squat, the bench-press and the deadlift.

With a combined lift of 722.5kg (made up of 230kg squat, a 222.5kg bench-press and a 270kg deadlift) Murdoch won his third world title in Glasgow in early November.

He now trains for four days a week in the gym for about two hours at a time but said his regime is very different from his playing days.

"Obviously the thing about powerlifting is that it's all about strength. There's no cardio fitness involved whereas in rugby it's a combination of strength, speed and skill - you compromise on strength to maintain endurance," he said.

"There's no point being the strongest guy on the pitch if you can't run for more than five minutes. But I've probably put on 10kg since I left rugby and improved my bench-press by about 30kg because I don't have to run any more - it makes life a lot easier in terms of lifting."

Murdoch was one of a number of top-class Australian wingers in the 1990s, with the strength of his rivals for the Wallaby shirt - which included Campese, Joe Roff, Ben Tune and Damian Smith - restricting him to just two Test caps.

"Just to play with people like David Campese, Tim Horan, Michael Lynagh and John Eales was a privilege," said Murdoch, who made his name at the NSW Waratahs before moving to England where he played for Bedford, Worcester and Exeter.

"Getting to play at the highest level was fantastic and just a huge honour."

There's no substitute for skill and speed

Contrary to what you might think for a man seemingly made of pure muscle, Murdoch believes modern rugby players need to be careful of the dangers of spending too much time in the gym.

"For me there's no substitute for skill and speed. If you've got those then it doesn't matter how much you lift in the gym, you can be a great player," he said.

"But if you don't then I suppose you need to make up for it in other ways and one of those ways is to be very strong - it levels the playing field.

"These days clubs are basically trying to maximise every single thing, and one of those is power. If you are strong and quick you're going to be better than if you're weak and quick.

"But it's the players who can avoid contact through their skill and still get through to the try-line that are special. Gym work is great to a certain extent but there's a fine line to tread."

In his new sport, there is a fair bit of politics to negotiate. The world of powerlifting contains a plethora of acronyms, with the number of splinter organisations rivalling even boxing's myriad federations.

As the "drug-free" portion of its name suggests, the WDFPF sets great store by its stance on drugs and its president Wim Backelant explained his organisation's position.

"Belonging to our federation means people have to be lifetime drug-free," he said.

"This is a very delicate matter because in principle all sports federations should be drug-free. I've never heard of a 'drug federation'.

"The big difference between us and other federations is that since we came into existence in 1988 we have always done out-of-competition tests. We were way ahead of other federations and any violation is a lifetime suspension, no second chances.

"We are a non-profit and very small organisation compared to mainstream sports like cycling or football but we do a lot of drug-testing, about 400 tests worldwide last year.

"Alistair Murdoch is a very good lifter in our federation and is the best in the unequipped [without strapping and other supportive equipment] lifting in the world but with his performances he wouldn't even be in the top 10 in some of the other federations."