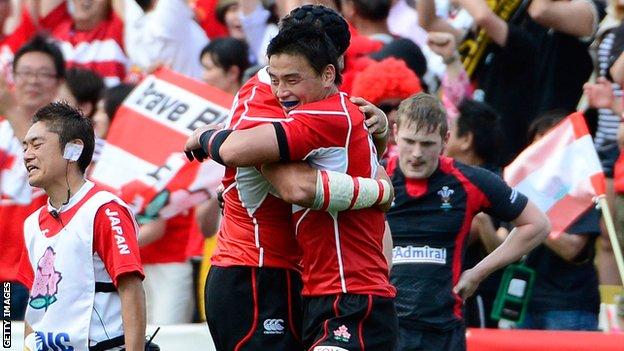 Kelly Brown has warned that Japan will be much more difficult opponents on Saturday than the side that were trounced 100-8 at Murrayfield in 2004.

Scotland's captain played in a 24-5 win over a Japan Select in a 2010 game that was not an official Test match.

"That was very tough," said Brown, who returns to the side after injury.

"I think the people who think it's going to be easy have obviously not watched the Japanese games from the summer."

Japan gave an indication of their quality by winning the Asian Five Nations and defeating Wales 23-8, although the intense heat of Osaka will be in sharp contrast to the conditions awaiting the visitors in Edinburgh.

"In the summer, they beat Wales and they're a side that, in the long-term, is really looking forward to hosting the World Cup in 2019," Saracens number eight Brown pointed out.

"So we're expecting a very tough challenge. They've got a good set-piece, they like to throw the ball about and they've got some very quick players.

"So we really need to make sure that we're on our guard in all areas."

The Scots suffered a surprise 21-15 defeat by Tonga at Pittodrie during their last autumn international series.

"That's not part of our thought-process at all," Brown told BBC Scotland.

"We've moved on a lot since then, we've improved massively and it's about making sure we keep on improving."

Ankle ligament damage cut short Brown's involvement in Scotland's summer tour of South Africa and he stressed that returning to fitness was his priority rather than regaining the captaincy.

"It is the kind of thing that, as a player, you can't really focus on," he said. "All I could focus on was working as hard as I could on my rehab.

"I did that, I worked incredibly hard and then I just let all of the issues regarding selection be taken care of by the coaches.

"I feel we have a really strong core of maybe three or four leaders, which I work very closely with and who I rely on a great deal."

After facing Japan, the Scots are expecting even tougher tests of their improvement when they host Australia and South Africa later in November.

"And if we can keep on improving then I think we'll be in a good place.

"The only target I've got right now is Saturday and making sure that we all play well as individuals and, if we can do that as a team, it'll be a successful day."