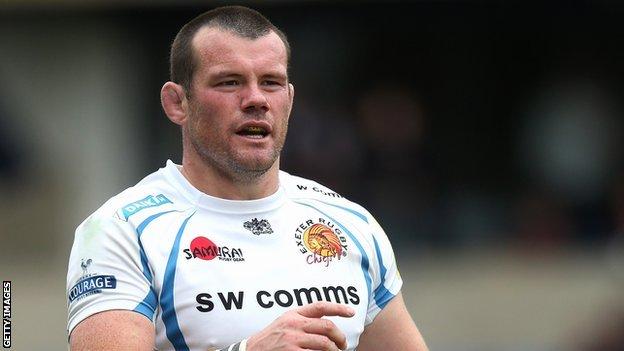 Former Exeter Chiefs captain Tom Hayes has retired from rugby at the age of 33 after a battle with injury.

The lock played 136 games for the club, but has been troubled by a back injury and made just two substitute appearances this season.

Hayes signed for the Chiefs from Plymouth Albion in 2008 and captained the side which gained promotion to the Premiership in 2010.

"It's been a great journey for me, but this is where I get off," said Hayes.

"Of course it's sad to be going out like this and I'm obviously disappointed to be leaving behind the boys that I've been playing with over the last few years.

"Rugby has been my life for a long, long time now, but sometimes you have to listen to your body and what the medical people are telling you. For me, it's been a privilege and an honour to be part of what we've done here at Exeter in the last few years.

"There have been some huge achievements along the way and lots of things that so many of us can be proud of. Obviously winning promotion into the Premiership is a highlight, as was getting into the Heineken Cup for the first time.

"To be playing sides like Clermont, Leinster and the Scarlets last year shows just how far we've come as a club.

"But I think staying up in the Premiership that first year is probably the biggest highlight for me. Nobody gave us much of a chance, but inwardly we backed ourselves with a group of players and we ended up finishing eighth."

Chiefs head coach Rob Baxter said Hayes - the brother of former Munster, Ireland and British and Irish Lions prop John Hayes - had personified the values of the club and had been the perfect captain for a side establishing itself in the Premiership.

"In years to come, people will look back at this period and he will be one of those guys that will go down in history as being part of the team that not only helped us get out of the Championship and into the Premiership, but then got us into the Amlin and the Heineken Cups and really helped to establish us as a club," said Baxter.

"It's always bad when a player has to retire prematurely from rugby because of injury, but at the same time he has had a good innings with us and he's enjoyed some very good times with Exeter.

"I can't give him too much credit for what he has done. He epitomises a lot of what we are about here at the club: he's hardworking, he's gets on with things without too much fuss and he will always dig deep when you need him most."