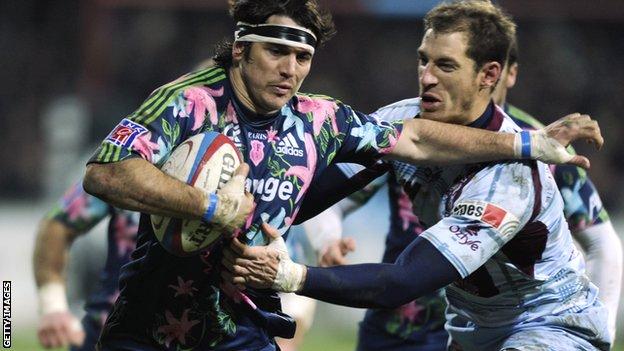 Tonga international Tu'ipulotu was forced to quit rugby in September because of a knee injury.

"Gonzo's a quality international player who I've known for a long time and after Tane's retirement we were short of a centre," Richards told BBC Sport.

The Falcons boss was formerly in charge at Harlequins, for whom he signed Tiesi from fellow Premiership club London Irish.

Prior to last weekend's 40-3 defeat at Saracens, Newcastle had the fifth tightest defence in the Premiership.

But they have scored just three tries in seven matches - four fewer than bottom club Worcester.

Since then the Argentine has played Top 14 rugby with Stade Francais as well returning to Buenos Aires for a brief spell with his first club, San Isidro.

He has been named on the bench for his country's game with England at Twickenham this weekend and will make his 37th international appearance should he take the field..

"Gonzo went back home to play for Argentina in the Rugby Championship so hasn't really sought another club," explained Richards.

"I've been monitoring him and the fact he was unattached meant we could keep a constant dialogue. I'm very pleased he agreed to come over.

"He'll join us after the autumn internationals are finished and add depth, competition and hopefully more points to the team."