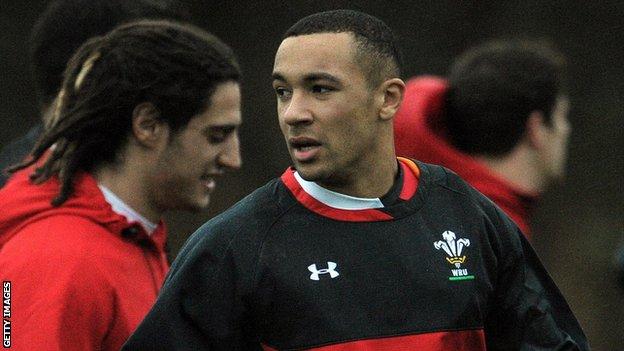 Wing Eli Walker says he is bitterly disappointed at being robbed of making his Wales debut against South Africa.

You just feel so desperate and gutted for the player

The 21-year-old uncapped Ospreys player injured a hamstring during training on Thursday morning and could miss all of Wales' autumn internationals.

Walker's place is taken by Scarlets utility back Liam Williams with Ospreys centre Ashley Beck moving onto the bench.

"Focused on doing everything I can to get back asap. And to work my ass off again to get the chance for that red shirt."

Wales assistant coach Rob Howley expressed his sympathy for Walker after he was forced to withdraw ahead of his debut.

"We are not too sure whether it's a grade one or grade two, and he is going to have further scans.

"We will await the results of the scan and the likelihood is that he will not be available for the whole of the autumn series.

"It's a blow to us because he has come in in good form and you just feel so desperate and gutted for the player.

"He trained particularly well with us, but an injury like that could be two days or 10 days... we are not sure.

"He is pretty disappointed and this happened last year [a back injury] and everybody knows about the ongoing problems he had through the summer."

Walker was tipped to be capped in the 2013 Six Nations, but missed out with the back injury which also kept him out of the summer tour of Japan.

With British and Irish Lions wing Alex Cuthbert out with an ankle injury, Saturday's game against the Springboks would have been the perfect stage for Walker to showcase his ability.

Walker had spoken of his excitement at making his long-delayed international debut earlier in the week on his Twitter account, saying: "Thanks for all the kind messages much appreciated! Proud moment."

Instead it will be five-times capped Williams - viewed as unlucky by many pundits not to make the starting line-up - who now has an opportunity to build on his impressive form for the Scarlets this season.