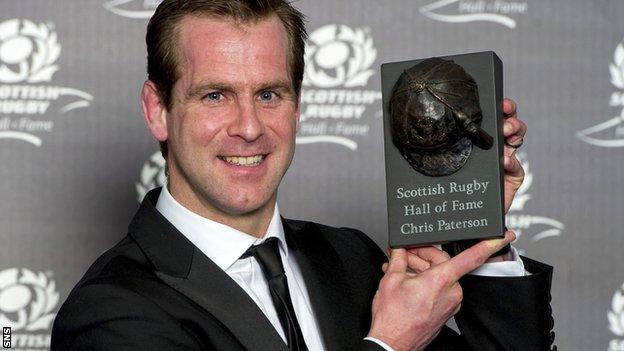 Scotland's record cap and points holder, Chris Paterson, is confident of a victory against Japan in the first of the Autumn tests on Saturday.

"They have to win and I think they will win," Paterson told BBC Scotland.

"Vern will respect Scott and the players and let them get on with what they want to do."

Johnson guided Scotland to third place in this year's Six Nations as interim coach but will move to a director of rugby role when Cotter assumes control of team matters in June.

There will be a lot of joined-up thinking between Scott and Vern, they'll have been in contact constantly since it was announced that Vern was getting the job

The duo continue to work together off the field, with Cotter targeting success in the 2015 World Cup campaign campaign in England.

But Paterson believes Johnson will be given room to work with his squad of players for the tests against Japan, South Africa and Australia.

"There will be a lot of joined-up thinking between Scott and Vern, they'll have been in contact constantly since it was announced that Vern was getting the job," said Paterson.

"There may be an influence on Scott Johnson, but it'll be a behind-closed-doors thing.

"They'll be trying to formulate the best plan and the best way forward to make the transition between Scott and Vern, but from the players' point of view, there won't be a distraction."

Cotter said on Thursday that he was pleased with the progress of the current squad under Johnson's guidance and has taken the opportunity to assist with training but maintained his input was low key.

However, Paterson, who was inducted into the SRU Hall of Fame on Thursday, insists that his main focus will be monitoring the progress of players with a view to his dream team for the World Cup.

"Vern probably won't have a huge amount of exposure to the players," said Paterson.

"He's a quiet man off the field - he'll keep himself to himself.

"He'll let them get on so that he can assess it and what he's got to inherit next year when he comes in."

If you look at the squad who aren't playing on Saturday, it could be an awesome team - Stuart Hogg, Tim Visser, Max Evans, Christ Cusiter - there's a lot of competition over the three games.

"We'll probably see a lot of these players who are fit to play and they'll give Scott an idea of where he stands in the lead up to the World Cup in two years' time," added Paterson.