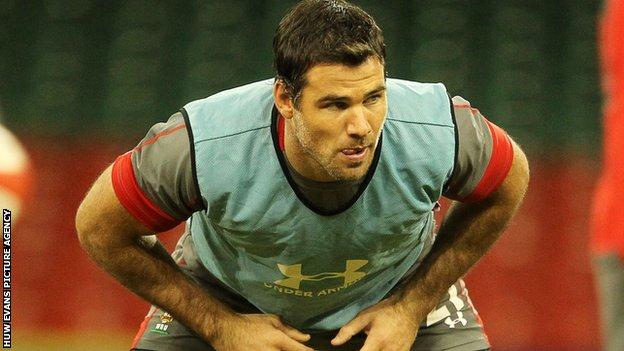 Mike Phillips has been backed to put behind him his Bayonne sacking and perform well for Wales against South Africa on Saturday.

The Springbok game is Phillips' first since being dismissed by the French club for allegedly turning up affected by alcohol at a video analysis session.

Wales say they have no worries over the scrum-half's mental and physical state.

When he needs to deliver the goods, he comes up trumps, and I don't expect it to be any different on Saturday

"He has probably got to prove his worth. However, there is no better big-match player than Mike Phillips. We've seen that in the past.

"When he needs to deliver the goods, he comes up trumps, and I don't expect it to be any different on Saturday.

"He is vocal, he is confident and he has got a spring in his step. I have been impressed with him."

Capped 77 times Phillips, who is without a club and intends to take legal action against Bayonne, will be key to Wales' bid for only a second victory against the Springboks.

Wales have won three Six Nations titles, two Grand Slams and reached a World Cup semi-final under coach Warren Gatland, but their record against the so-called 'big three' of South Africa, New Zealand and Australia is not good.

"Historically, we have always struggled, especially early on in the autumn campaigns, and then got better as the games have progressed," McBryde said.

"However, we've got rid of of that as an excuse, especially considering the summer we had with the players involved with the Lions.

"And our last match here was a great day against England, so there are happy memories coming back to the Millennium Stadium.

"We will be trying to recapture some of that form we showed against England.

"South Africa will be keen to recapture their form of the Rugby Championship, but we've just got to focus on ourselves and make sure that we are able to live in that arm wrestle, the intensity and keep our composure and make sure our accuracy is as good as it can be.

"If we can do that, then we know we are going to be in with a shout."

Lock Alun Wyn Jones, who led the British and Irish Lions to a series-clinching success in Sydney last June, insists Wales must be looking for a famous win.

"We need to start getting these scalps. We've been close in the last 12-18 months, and we need to start converting those narrow losses into wins," Jones said.