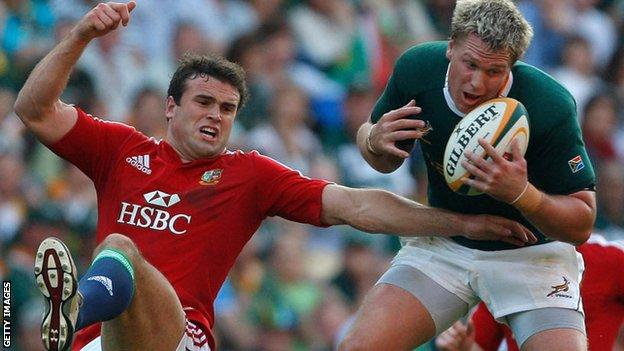 Springboks captain Jean de Villiers believes the absence of Jamie Roberts will not weaken Wales when the teams meet in Cardiff on Saturday.

The Racing Metro centre has an ankle injury with Scarlet Scott Williams taking his place in the midfield.

"He's [Roberts] been replaced by another good player and the challenge will be no different for me," he said.

De Villiers will be partnered by Jaque Fourie for the first time since the 2011 World Cup.

"Jamie Roberts is a quality player and I enjoyed the times that I played against him," added de Villiers.

"It's always a good challenge, and it's always unfortunate when there's injuries."

The de Villiers-Fourie combination is one of the most respected midfield partnerships in world rugby.

The South Africans would have faced the 2013 Lions partnership of Roberts and Jonathan Davies had the former Cardiff Blues centre been fit.

However, they will still face an established partnership with Williams and Davies the first-choice combination for the Scarlets.

The return of Fourie after two years away from the national team does not weaken the Springboks according to de Villiers.

"The funny thing about our partnership is that the first time we played together was in a test match against Australia and we seemed to click from the get go.

"Hopefully the same can happen on Saturday and we can just continue with that partnership."

The Springboks have lost just twice in nine games this season, with both defeats coming against world champions New Zealand.

The second of those came in the deciding fixture of the Rugby Championship, with the All Blacks running out 38-27 winners in a classic game at Ellis Park.

Despite that defeat, de Villiers believes South Africa are a team on the rise.

"I think this team has come a long way in the last couple of months," he said.

"I think we've improved drastically in certain areas and hopefully we can just take that now into this game.

"Obviously we didn't end the Championship on a high with a loss, but there were a lot of positives to be taken out of that game."