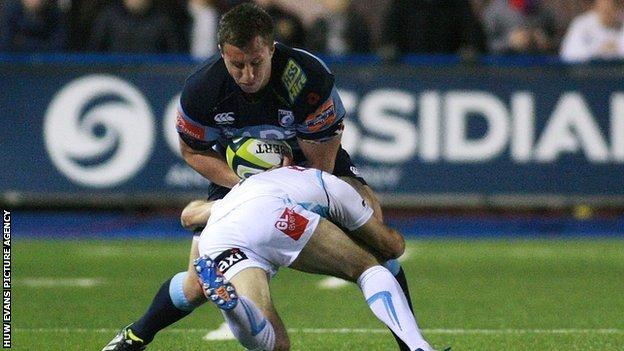 Worcester Warriors survived a second-half comeback from Cardiff Blues to secure their first win of the season in the LV= Cup.

The Blues were leading 6-0 early on through two Gareth Davies penalties.

But tries from Leonardo Senatore, James Stephenson and Max Stelling, all converted by Ignacio Mieres, gave the visitors a 21-6 interval lead.

The Blues, who were without 20 players on international duty at Cardiff Arms Park, secured a losing bonus point.

But, despite missing out on the bonus-point victory which looked likely at half-time, Worcester director of rugby Dean Ryan was relieved to record his side's first win since he took over this summer.

"We let them into the game by missing one-on-one tackles, but the attitude and intent in the second half were excellent.

"Our systems were fine, but we allowed them to build a lead and it was a big job to pull it back.

"We need to get these young players used to the idea that they have to play with that determination from the beginning and maintain it for 80 minutes."

"I thought the first-half performance was excellent.

"But the second half showed some of our vulnerabilities under pressure and that just shows where we are and how we're growing.

"We had to make a few changes in the second half, which didn't help our momentum, but to come away from here and get a result is very pleasing."