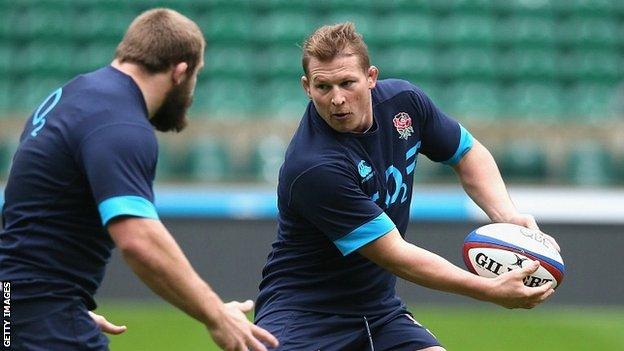 England hooker Dylan Hartley says his team can "make a statement" with a convincing performance against Argentina on Saturday.

England struggled for fluency in their 20-13 win over Australia on 3 November and Hartley is seeking an improvement.

"You can probably be excused for the first game, having had a week together," said Hartley.

"But if we want to make a statement and move on we need to beat another top side in Argentina."

The Pumas have not beaten a major rugby nation since winning in Wales on November 2012 and lost all six games in the southern hemisphere's Rugby Championship.

However, England captain Chris Robshaw, whose side have won their last six matches at Twickenham, said the hosts would be "in a world of trouble'' if they took them lightly.

Hartley feels likewise and is predicting a tough battle among the forwards.

"It sounds like it will be a really forward-dominated game - that's perfect," said Hartley, who was banned for 11 weeks and missed the Lions tour after verbally abusing the referee in the Aviva Premiership final in May.

"I'm looking forward to it. It will be set-piece orientated, physical around the breakdown and played at close-quarters.

"England's forwards didn't miss a tackle against Australia and we are going to have to be very good this weekend to replicate that."

England coach Stuart Lancaster has made four changes to the starting XV at Twickenham, with the combative Hartley replacing Tom Youngs at hooker and Joe Marler coming in for the injured Mako Vunipola at loose-head prop.

Leicester prop Dan Cole, who has been a fixture for England since making his debut in 2010, makes way for Bath tight-head David Wilson, while Ben Foden replaces the injured Marland Yarde on the wing.

Billy Twelvetrees is retained alongside Joel Tomkins in midfield despite a unconvincing performance against Australia, as England attack coach Mike Catt looks for more threat from the backs on Saturday.

"All of us were a little bit disappointed with the attacking performance against Australia," said Catt.

"We want the set piece we need against Argentina so we can generate the type of ball guys like Billy and Joel thrive on and release the likes of Chris Ashton, Ben Foden and Mike Brown.

"We'd like it to be nice and dry so we can really move Argentina around."

New Argentina coach Daniel Hourcade, who took over recently following the resignation of Santiago Phelan, has made five changes from the team crushed 54-17 by Australia in the Rugby Championship.

Despite being underdogs, Argentina skipper Juan Manuel Leguizamon insists the Pumas will be fired up.

"The team is very tight and our objectives are clear. People are talking about (Argentina's struggles), but we don't care," said Leguizamon, who will captain the side in place of the injured Juan Martin Fernandez Lobbe.

"We are all professional players and we must adapt ourselves as quickly as possible to the new system."