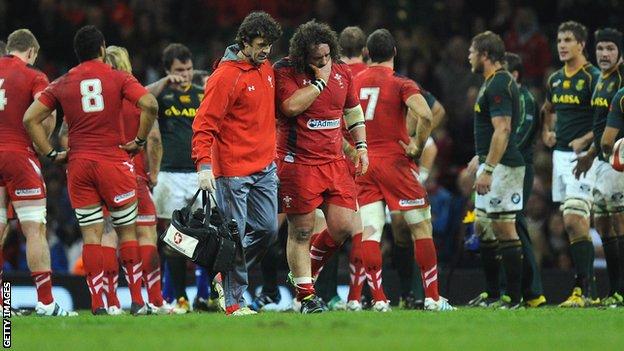 Prop Adam Jones has been ruled out of the remainder of Wales' autumn international series.

The Ospreys tight-head injured his calf during the 24-15 loss to South Africa and will miss the Tests with Argentina, Tonga and Australia.

It is a further blow to Wales as Jones' fellow British and Irish Lion, centre Jonathan Davies, is also out of the autumn series with a pectoral injury.

That problem could rule Davies out of the start of the Six Nations.

The Scarlets centre, "faces a period of rehabilitation of up to four months" according to the Welsh Rugby Union.

That could rule Davies out of Wales' opening Six Nations game at home to Italy on 1 February, plus the trip to face Ireland the following Saturday.

Scarlets props Samson Lee and Rhodri Jones plus Dragons backs Hallam Amos and Tom Prydie have been called up to train with Wales this week.

Wales suffered a number of injuries during the defeat to the Springboks, with wing Liam Williams suffering a blow to the head and prop Scott Andrews (neck) also coming off injured.

Ospreys wing Eli Walker was due to make his Wales debut against South Africa but had to pull out with a hamstring injury he sustained during training.

Cardiff Blues fly-half Rhys Patchell suffered a shoulder injury during training and both players have returned to their regions for further treatment.

Wales coach Warren Gatland was already without a number of key players for the four November Tests.

Racing Metro centre Jamie Roberts and Alex Cuthbert were ruled out before the South Africa match, while Exeter prop Craig Mitchell, who has won 15 Wales caps, is also out because of a

After facing the Pumas on Saturday, Wales host Tonga on Friday, 22 November and Australia on Saturday, 30 November.