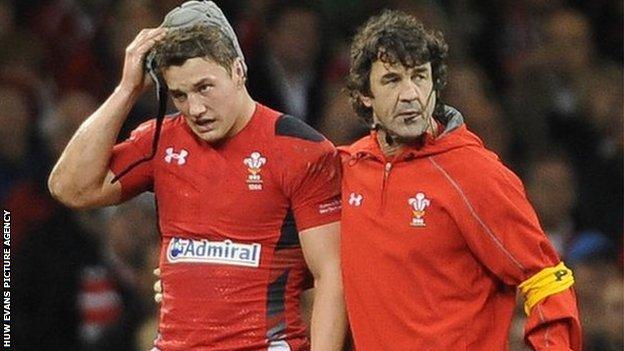 Wales centre Jonathan Davies is out of the rest of the autumn series and could miss the Six Nations after suffering a pectoral injury against South Africa at the Millennium Stadium.

It is another blow to coach Warren Gatland, who is already without fellow centre Jamie Roberts.

"If he needs an operation it could be five months," said Gatland.

"He's pretty disappointed. The physio said it might settle and he could be back in December. We will wait and see what happens."

Davies's Scarlets team-mate Williams was also hurt in the move that led to the opening score, taking a blow to the head from the knee of Bismarck Du Plessis.

However, Gatland is hopeful he will be available for Wales' match against Argentina next Saturday.

Ospreys prop Jones is doubtful for that game, though, after limping off 10 minutes before the interval with a calf problem.

His replacement, Scott Andrews, did not reappear for the second half due to a neck injury.

Exeter prop Craig Mitchell, who has won 15 Wales caps, is also out because of a

Another problem could be Cardiff Blues fly-half Rhys Patchell, who is "struggling" with a shoulder injury, according to the region's defence coach Dale McIntosh.

Gatland was already without a number of key players for the four November Tests.

Racing Metro centre Roberts and Alex Cuthbert were ruled out before the South Africa match, while Eli Walker, who had been due to make his Wales debut on Saturday, suffered a hamstring injury in training.

"We've taken a bit of a toll but that's rugby and potentially it's an opportunity for someone else," Gatland added.

Wales play Argentina on Saturday, Tonga on Friday, 22 November and Australia on Saturday, 30 November, before the Six Nations starts in February, with Wales' first match coming against Italy on 1 February.